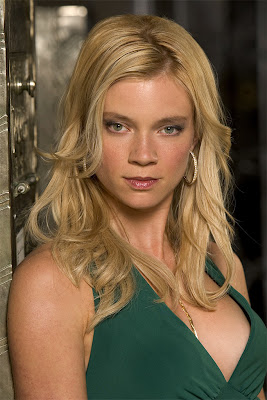 Cute and blonde, California native Amy Smart has been busy playing everything from bit-parts to leading lady since her acting debut in 1996, appearing in over 50 films and television series. Best knwon for appearing in "Varsity Blues", "Outside Providence", and the two gonzo action films in the "Crank" series, her resume has been dotted with horror films since the earliest points of her career.

Smart appeared both im the anthology film "Campfire Tales" in 1997, and followed up the next year with the the internet stalker horror film "Strangeland". Ten years later, she made it a double-bill when she starred in two horror films that year--"Mirrors" and "Seventh Moon."

We won't have to wait ten years for Smart's next horror film, however. She is currently filming "7500", a movie about supernatural happenings during a flight across the Pacific. It's being directed by the "Grudge" series that is slated for release in late 2012.