'Tales of Terror' is Roger Corman at his best

This is the film that convinced me that Roger Corman actually could make a good movie, when I first saw it. My first exposure to his work was "The Wasp Woman" and "The Terror", not exactly Corman at his best.

"Tales of Terror" is an anthology film that features three shorts loosely adapted from stories by Edgar Allan Poe, and further tied together by the fact that each star Vincent Price in a different role. 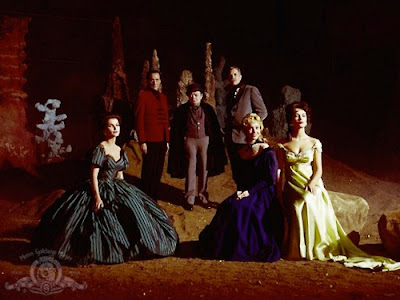 First up, we have the chilling and tragic tale "Morella", where a young woman (Pierce) returns to her childhood home in one last attempt to connect with the father who rejected her (Price) after the death of her mother. Moody throughout and downright terrifying at the end, this story is a excellent excursion into the dark corners of the human heart and a fabulous horror story.

Next, we have "The Black Cat", which folds the story of the same name and "A Cask of Amontillado" into one tale of dark comedy as a drunkard (Lorre) ends up in a hum-dinger of a drinking competition with a snooty wine-taster (Price) after he stumbles into an annual wine festival. When he later discovers that wine-taster has been having an affair with his wife, he decides to take drastic action. This tale is characterized by a taut balance between comedy and a brooding sense of dread, with the on-screen interplay between Lorre and Price being a fabulous bit of movie magic. (They're even better here than in "A Comedy of Terrors".)

Finally, we are presented with "The Facts in the Case of M. Valdemar", an exceedingly creepy tale of a greedy mesmerist (Rathbone) who uses hypnosis to trap the spirit of a dying man (Price) between this world and the next... with terrible consequences for everyone involved. This segment isn't as stunning visually as the first two, but it gets plenty skin-crawly as it builds toward its climax.

The ever-present cheapness in a Corman film is invisible here. I've no doubt that every dollar is present on the screen, but the crew working on this film built some great sets, they're beautifully lit, and the camera work and editing is excellent; the material here looks far better than what I still think of as "typical" Corman. Further, there's no obvious padding to dispel the mood of horror and dread in any of the three stories.

All the principal actors (and even some of the bit-players) give excellent performances. I would even venture that Price might not be the best in this film--Lorre's comedic performance is fabulous, as is Rathbone's turn as a blackhearted villain. (That's not to say that Price isn't great in all the three parts he plays.)

If you like classic horror movies, I'm sure you'll love "Tales of Terror." If you tend to sneer at Corman films, as I used to, maybe this one will show that he can be really, really good when working with the right cast, writers, crew... and when he takes more time than 48 hours to shoot a film.