I've come to believe that there are two general statements that can be made about anthology films. First, it doesn't really matter if any one segment is weak, because something else is going to follow in sort order, and it'll be better. Second, the best is usually saved for last (or second last).

When it comes to the anthology film "Dr. Shock's Tales of Terror", both of those general statements are inaccurate. While each segment is brief--the film is a collection of four short splatter flicks, each with an introductory host segment--it doesn't follow that what comes next is better. Similarly, the film doesn't save the best for last; in fact, as it progresses, things get steadily worse.

I'm going to assign ratings to each part of the movie as I discuss it. The rating at the top of this post is an average applied to the entire film.

The tone for the film is set in the host segments. Each film in "Dr. Shock's Tales of Terror" is, naturally enough, introduced by Dr. Shock, an obnoxious and very unfunny character who is like a male Elvira on a cocktail of uppers. His antics are supposed to be reminiscent of the Crypt Keeper, and the stories he introduces are likewise supposed to be tales of gore with humor and twist endings, just like "Tales From the Crypt" when it was at its best. Sadly, Dr. Shock and his material are nowhere near the quality of even the worst "Tales From the Crypt" episodes. The host segments do what their supposed to, but they're more irritating than funny, so they rate 5/10. 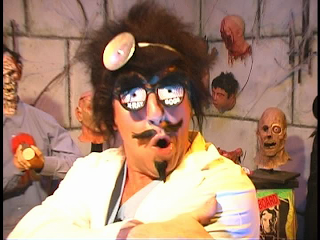 The first of the four terror tales included is "Bullet for a Vampire". In it, the bitchy daugther (Zeithaml) of a mobster (Standriff) brings a gypsy curse upon her family, in the form of a vampire (Timide) who introduces himself as "Drake Uala, from a small town in Scandinavia." (And, yes, that is so stupid that I resigned myself to the fact that I was in for something truly craptacular.) However, the story is amusing enough, and the performance of Standriff as a mobster who takes on vampires with an attitude that would humble anyone in the Soprano household, makes it even more entertaining, despite the badly written dialogue. The sets and vampire makeup are also pretty decent for a low-budget, shot-with-a-camcorder production. It could have done with a little trimming here and there, but, it wasn't a bad effort. I give it 5/10, and note that it could have been a 6/10 if the script had been tightened up a bit.

The second film is "The Town That Loved Pizza", and it deals with a pair of creepy strangers (Hoyt and Kelly) who open up a pizza parlor on the outskirts of a small town in northern Texas. Their all-mean pizzas become all the rage in the town, but when citizens start vanishing, the question arises: Just what is the mystery meat on those beloved pizza pies? I think this one was supposed to be equal parts gross, horrifying and funny, but it's really just predictable, over-long and dull. It gets 2/10.

Next up, we have "The Garden Tool Murders" which features a grounds-keeper who goes nuts and starts killing people who litter or otherwise behave in an anti-social fashion in and around a small town park. Who will stop the rampage? Well, the answer is almost as horrifying as the Garden Tool Murders themselves. Very silly, very gory, and nowhere near as dull as "The Town That Loved Pizza" this short is almost as good as "Bullet for a Vampire", and it rates 5/10.

Closing out the collection is "Demon's Day", a nonsensical little effort that demonstrates why cloning is bad and shows that the preferred method by which a demon dispatches a victim is by pulling his or her head off. (It's also the film that made me realize that Miss Cherry from "The Garden Tool Murders" WASN'T a guy in drag, as Kristen Brochetti reappears here as a hooker seeking redemption from the Lord; she just happens to have a very... um... severe face. If there was a point to "Demon's Day" and its weird circular "was it a dream or wasn't it" content, it was one that's either too deep or too dumb for me to grasp. It rates 1/10

"Dr. Shock's Tales of Terror" is an all-around disappointment, even for someone like me who loves the anthology format. "Bullet for a Vampire" and "The Garden Tool Murders" have the genesis of good ideas within them, but I think that the efforts of Agosti, Smith and Friends demonstrate here that there's more to making good movies than enthusiasm and good ideas. (In the hands of someone with more experience or talent or both, or if some more work had gone into the scripts, I think those could have been truly fun little movies. But, "could have" is not good enough for a recommendation. And, as much as I'd rather not, I must advise all to take a pass on this film.