After the scientific establishment laughs at his theories that he can eliminate man's baser instincts with a medical treatment, Dr. Jykell (Palance) tests his concoction on himself and is transformed body and mind into the vicious Mr. Hyde (also Palance). 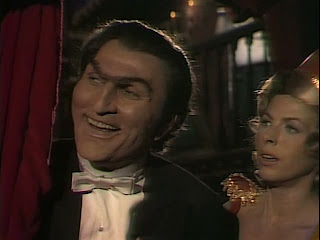 This 1968 made-for-TV movie is perhaps the best screen adaptation of Robert Louis Stevenson's classic tale. It is more faithful in tone and spirit than actual content--as I suspect a completely faithful adaptation would be a little boring.

That said, this Dan Curtis-produced film is swathed in London fog (via Canadian sound stages) and is drenched with gothic horror atmosphere. It wastes no time in getting going, and within the first 20 minutes, Dr. Jekyll has unleashed Mr. Hyde, and he's racing down the road to personal destruction and murder.

The film is driven more by excellent dialogue than actual action, but what action there is as thrilling as it is chilling... because Jack Palance is at the top of his game in this film.

Palance is absolutely bone-chilling as Mr. Hyde, showing him as every bit the wild and impulsive figure of Victorian repression unleashed... not to mention pure evil; the scenes where he takes on a group of thugs and later when he torments a woman just because he can are some of the most powerful and dark moments Palance ever had on screen. He also, however, manages to invoke a mixture of sympathy, pity, and occasional disgust, in the viewer with his portrayal of Dr. Jykell, an arrogant and foolish man who lets his dark side run wild just because he can. Jykell's ultimate weakness of character is exposed as the film reaches its climax, and Palance builds it up perfectly with his performance.

This is a must-see for fans of gothic horror, Jack Palance, and just well-made films.