Like an episode of a TV anthology series with padding

Bill (Graham) has problems. His psychiatrist has put him on medication that is distorting his reality, his relationship with his girlfriend has fallen apart... and there's a dead girl in his bath tub, but he doesn't know how she ended up there. 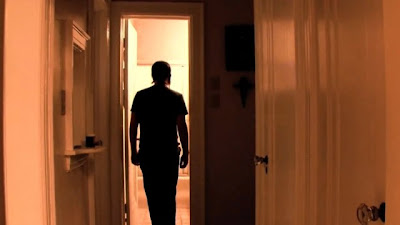 If you're like me, you enjoy movies that present mysteries that you can try to solve as the film unfolds, opportunities to get ahead of the filmmakers and then be proven right or wrong in your assumptions.

"Fell" is one of those movies. And being that it's a film that takes place almost entirely within the apartment and/or the mind of a madman, it presents numerous puzzles for the viewer to try to piece together ahead of time. While most of the answers to what is happening in the film aren't surprising, the build-up to them is effectively staged. Transformations in the apartment gives viewers hints as to what is really happening, as do the behavior of the characters. And while I correctly guessed almost every fact of what was going on in the film, there was a final twist at the end that made me change my overall evaluation from "that was predictable" to "that was predictable but cool!"

Unfortunately, as I mention in the headline, "Fell" suffers from too much padding, especially in the first half hour. It's got the story of an intense episode of "The Hitchhiker", "Tales From the Darkside" or "Hammer House of Horror", but the director makes the all-too-common mistake of either thinking his audience dim or not trusting his own ability to get his point across and thus ends up repeating himself to the point of tediousness in his effort to make sure we get that Bill is crazy and can't distinguish reality from hallucinations. Some trimming would have made this film even more intense than it already is.

Despite being a little flabby, I still think this film is well-worth a look by anyone who enjoys psychological horror... and for anyone who wants to see a perfect example of how to make a fine movie for very little money.

(This review was based on a preview screening copy provided by Distributor Chemical Burn. "Fell" will be in stores on June 6, 2012... but, strangely, not at Amazon.com.)