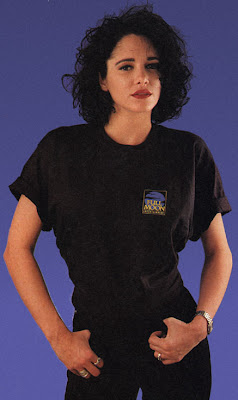 Charlie Spradling was the spokes-model for Full Moon Entertainment during the mid- to late-1980s, so those of us who were around for the dawn of home video (and whose tastes ran toward oddball and horror flicks) remember her best clowning around with movie props, conducting an interview or two, and flogging logo wear for the "VideoZone" featurettes that Charles Band produced for most of his releases during that time.

Spradling also appeared in some of the actual films from Full Moon. She was abused by otherworldly carnies in "Meridian" (1990), fell victim to killer puppets in "Puppet Master II" (1991), and got zapped by aliens in "Bad Channels" (1992).

Away from Full Moon, Spradling had small roles in a number of mainstream films and television draams, but she also had a few starring roles in horror films and thrillers, such as playing a vampire love/lust object in "To Sleep With a Vampire" (1993), and as a detective trying to protect an actress from a serial killer in "Angel of Destruction" (1994). A notable small horror role was that of a teenager doomed to die by a cursed mirror in "Mirror Mirror" (1990).

Spradling's film career never quite took off, and it sputtered to a stop as the 2000s dawned. However, she was already enjoying success in the publishing field, and she is currently a senior executive at "Pasadena Magazine."