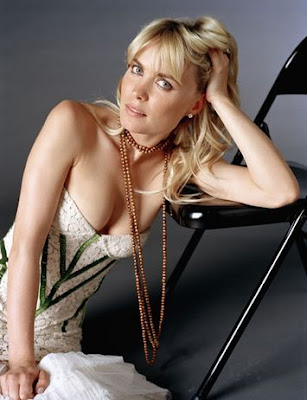 Born in Melbourne in 1973, Australian actress Radha Mitchell got her start playing bit-parts on television shows in her homeland during her teens and early 20s. She moved to the United States in 1997, settling in Los Angeles and launching full-tilt into a film career as a leading lady.

Mitchell's resume sports a variety of films, ranging from turn-of-your-brain comedies to intense historical dramas. And, of course, horror films.

Her first horror role came in 2000 when she played an officer on a passenger spaceship that crashes on an uncharted alien world in "Pitch Black". Other chillers followed, several based in psychological horror. Among these are "Visitors" (2003), in which Mitchell and her breasts play a woman trapped in a nightmare while trying to sail around the world; "Silent Hill" (2006), where Mitchell is a mother searching for her missing daughter in a bizarre small town; "Rogue" (2007), in which she plays an Australian Outback guide battling against a killer croc; and "The Crazies" (2010), where she must battle against an entire town gripped by madness.

Mitchell has eight different projects in varying stages of completion and is slated to start work on "Red Window," a new television crime drama in which she stars as the heiress to a criminal enterprise. On the horror front, she returns later this year--just in time for Halloween--to the town of Silent Hill in "Silent Hill: Revelations".