'Soul Survivors' feels a bit like a death march

College freshman Cassie (Sagemiller) survives an accident that kills her boyfriend (Affleck), but soon finds the world transforming strangely around her. Maybe Cassie didn't survive at all... maybe Cassie is in Purgatory and being pulled toward Hell by demons posing as her friends? Or maybe Cassie is just out of her mind? 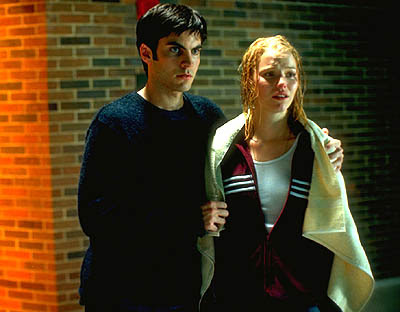 "Soul Survivors" is one of those movies that sets out to put the viewer in the place of a central character for whom life increasingly becomes a nightmare where it's impossible to tell what's real and what's imagined... or if anything it real. It's a time-honored and tested horror movie and thriller convention, and when it's done well, it leads to movies I like very much.

Unfortunately, it's not done well in this film. It starts out spooky and struggles to evolve into creepy or scary, but instead becomes tedious and repetitious. Too many flat performances and too many build-ups that don't pay off with anything will have most viewers not caring one bit whether Cassie is being gas-lighted, whether she's hallucinating while in a coma, or whether she's dead and in Hell already. Most viewers will simply be too bored to care--it may just be an hour and a half long, but it feels like twice that as you are stilling through it.