'Tied in Blood' is an excellent ghost story

Robert (McEwan), a talented professional medium who resorts to phony seances to keep the money flowing when his gift fails him, is asked by a desperate man (Hodgson) to banish the ghost that killed his family. Robert jumps at this chance to use his gift to genuinely help someone, but when he arrives at the haunted house, he is confronted not by the expected malevolent spirit but instead by the confused ghost of the murdered family (Cooke, Leach, and O'Donoughue). As Robert speaks to them, attempting to help them "cross over", a story of ghostly seduction, demonic rage, and deep, dark secrets emerges. 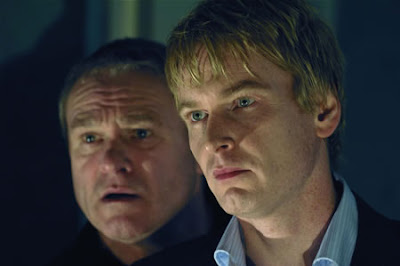 "Tied In Blood" is a slow-burn horror story that is more literary in its feel and execution than most movies you'll see. The horror here doesn't ultimately come from special effects gore splattering everywhere but from the darkness within the characters and how it got there.

The film can be compared to a dark and twisted version of "Ghost Whisperer". The protagonist spends the film communicating with the spirits of the dead in order to help them find peace so they can rest, while trying to prevent the living from screwing up his efforts by reminding the spirits of whatever grief or regrets are keeping them trapped between life and the afterlife. It can also be compared to "Rashomon" or "Five Times That Night" in that we're presented with different, wildly varying accounts of the same series of events, with the truth (or as close as we'll ever get to it) finally emerging at the end. And with "Tied In Blood", it's a horrible truth.

Screenwriter David Ross and director Matthew Lawrence paced the film expertly, producing a lean, straight-to-the-point movie where every scene and every line spoken plays into the mystery of what happened in the house. There is no need here to rely on fake build-ups abd "gotchya scares" because there are plenty of chills in the script itself. In fact, by horror movie standards, the cinematography is rather plain and everything is brightly lit and seemingly cozy and normal... even the creepy abandoned manor visited by the soon-to-be-dead teenaged brother and sister, and the nocturnal visits by the ghost (Amie Morris) are mostly free of spooky shadows. It's a rare and, in case, effective approach that makes the unfolding events all the more disturbing.

The dispensing of the hoary tricks of gothic horror that have been in play since "The Cat and the Canary", this film instead rests on its well-crafted script and the performances by its talented cast. Everyone in the film gives excellent performances, with as much being said with gestures and facial expressions as through the delivery of dialogue. And nowhere in the film is the acting more effective than the interchanges between Laura O'Donoughue and Chris Leach who play bother and sister. Even before their true personalities and relationship emerge through the various telling of events, the viewer can tell there's something not quite right simply through the way O'Donoghue and Leach portray them. It's some great acting, and I hope to see more of both of them in the future.

The same is true of the work of David Ross and Matthew Lawrence, who make their screenwriting and directorial debuts respectively with this film film.

If you're a fan of well-told ghost stories and horror films that command your attention through characters and story rather than special effects, should check out "Tied in Blood" when it debuts on DVD on June 26, 2012.


(This review was based on a preview screener that was provided by distributor Chemical Burn.)