A bizarre murder sets a pair of renegade Chicago police detectives (Levels and Norris) on the path to stopping the herald of Satan himself (Neame) from creating Hell on Earth. 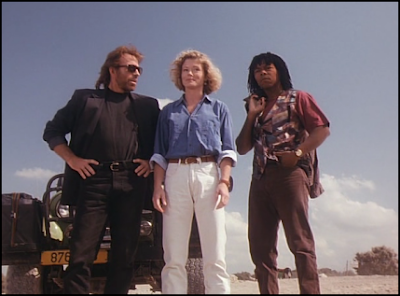 As a concept, "Hellbound" must have seemed like a winner--Chuck Norris taking on then left hand of Satan and spin-kicking him right back to Hell. Unfortunately, the execution is severely lacking in Chuck Norris's only horror film.

For a mid-1990s buddy cop picture crossed with a horror film, this is a surprisingly sedate and predictable affair. It's almost as if the filmmakers couldn't bring themselves to embrace the wild potential of what was here and what they delivered is a collection of half-baked buddy cop cliches, a romantic interest for Norris to ill defined that the viewer barely cares that she is going to be sacrificed to Satan.

The film's cast doesn't help matters any. They were working with a mediocre script and they did not rise above the material. Calvin Levels, as the smart-mouthed comic relief sidekick to Norris's man of action, is so annoying you will find yourself wishing that he will be whacked, Sheree J. Wilson is once again a damsel-in-distress, but she phones in the performance of an already weakly defined character. Christopher Neame is sufficiently creepy as the demon walking the Earth, but he is under-utilized. And star Chuck Norris is... well, he's Chuck Norris. He is actually better here than in other films, although even he is let down by the half-hearted nature of the film with a less-than-apocalyptic final showdown between him and demons.

Unless you are a huge Chuck Norris fan, or haven't seen more than one or two buddy cop-style pictures, you won't be missing much if you take a pass on this movie.