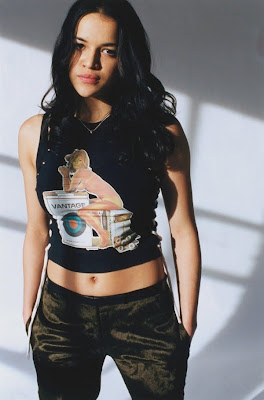 Born in Texas, but raised in the Dominican Republic and New Jersey, Michelle Rodriguez has made a career out of playing tough women who might just as well kick your ass as say hello. She is perhaps best known for her recurring role as Letty in the "The Fast and the Furious" film series (which she returns to next year, despite her character being killed off in the fifth entry"Fast & Furious"... maybe they're adding street-racing zombies to the mix?

Speaking of zombies, Rodriquez has racked up a few horror credits since her film debut in 2000. Her second major role came as a zombie-killing cop in the original "Resident Evil" film in 2002, she traded punches with vampires in 2005's "Bloodrayne" while fearsome beasts sought to devour her in 2006's "The Breed".

Rodriguez returns to kill more zombies in "Resident Evil: Retribution", the latest installment in the videogame-inspired zombie action movie series which will be in theaters this coming Friday, September 14.