'Asylum of the Damned' should be shut down

When James Bishop (Stasi) goes from run-of-the-mill resident to supervisor of a ward at St. Andrews' State Mental Hospital straight ouf of medical school, he thinks his career is off to a rocketing start. However, he soon discovers this mental hospital is a little more hellish than most... and that a demonic cult is feeding the patients to a demon in the hospital's basement. 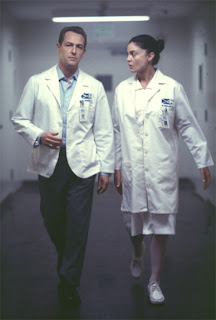 "Asylum of the Damned" features a lazily written, badly researched script--from presenting a plot that only works because our hero behaves stupidly from the outset, to presenting us with a hospital so badly run that even the demon in the basement wouldn't be able to save its director (Payne) from being investigated by any number of regulatory commissions--that features dialogue that's so tortured at times that the writer must have been emulating Ed Wood.

The film also fails utterly to do what a horror film set against a modern backdrop absolutely must to in order to work: The film never bothers to ground itself in anything that resembles normality. It is groan-inducingly unbelievable from the outset. The creepy way the hospital is presented as soon as our hero arrives, and the behavior of the staff--from the security guard to the head doctor--is so rude and unprofessional from their first appearances that it's plain the viewer is in for something very awful... and it guarantees the film's failure. The overblown attempts at establishing a menacing air IMMEDIATELY in the film means that no true menace is ever really felt--even the hackneyed "gotcha!" scares fail to work, because the film's beginning is so badly botched.

It's a shame the direction and scripting of this movie was so severely botched, because the cast actually did a fairly good decent job. If these actors were assembled for a film with a script that was perhaps taken through a second draft before filming started, and if they were in a film that actually had a first act, I think they might be able to impress. The creature design was also excellent--the soul-eating demon in the hospital's basement is far better looking than I would have expected in a rancid turkey like this. It's the one thing in the film that will make you sit up and go "wow!'

Of course, I don't recommend you ever take the opportunity to view that demon, because "Asylum of the Damned" isn't worth whatever time you devote to it.