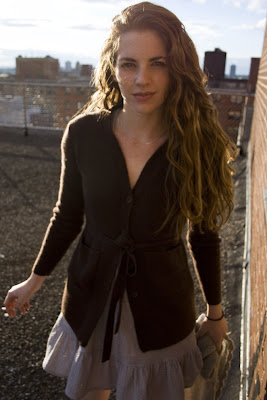 Jean Louise O'Sullivan was born and raised in Pennsylvania. Aspiring to be an actress from a young age, she moved to Los Angeles in 2007 to pursue a career in film and television. She has so far appeared in nearly a score of television shows and films.

O'Sullivan can be counted among a new crop of leading ladies appearing in films from Charles Band's Full Moon Features--and she has already gotten an opportunity to show that she is capable of playing a broad range of characters, as was a tomboyish roller-skater in "Gingerdead Man 3", an evil and sexually perverse silent movie diva in "The Dead Want Women", and an all-American girl brimming overflowing with apple pie and patriotism in "Puppet Master X: Rise of the Axis". As distinctly different as her characters were, so was her appearance; I think O'Sullivan will become a sought-after chameleon-esque character actress if she stays on her current career path.

O'Sullivan's announced projects are all horror films. In addition to the about-to-be released "Puppet Master X" (it's out on October 9, 2012), she has a lead role in the "Psycho" prequel "Welcome to the Bates Motel" and a small part as a murder victim in "The Red House".