An undead, shape-shifting Indian shaman takes gory revenge on a group of researchers that has disturbed his underground tomb (located deep in the Everglades swamp). 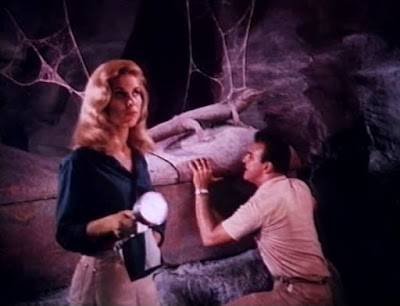 If you're looking for a movie that gets virtually nothing right, "Death Curse of Tartu" is the film for you. It's got bad actors delivering badly written lines, it's got bland cinematography, pathetic gore effects, some of the worst Foley work you'll see this side of silent movies, and so much inappropriate sound track music that you'll grow numb to it. (The director of the film apparently thought that dramatic music during scenes where nothing happens--such as shots of characters trekking through the bushes or someone making coffee at the campfire--would make the film more exciting). To perfect the awfulness of the film, every character is too dumb to ive, including the survivors of Tartu's wrath and even Tartu himself. There are few films that rely more on "Stupid Character Syndrome" to drag itself to its non-thrilling conclusion this one.

And then there's the fact that Tartu is buried in a bone-dry, sandstone cave that looks like it belongs in the American Southwest rather than a Florida swamp. It makes absolutely no sense and it destroys what little credibility the film had. (Even if such dry caves are possibly in a goopy swamp, it doesn't feel realistic... a thing that's important to achieve in films like this.)

The movie is also deadly dull for the first 35 or so minutes--as it's 12-15 minutes of real material padded with useless film of characters meandering about the swamp--but it picks up a bit when the main group of characters gets to the Everglades. Unfortunately, the padding problem only becomes slightly less severe, causing interesting and even borderline suspenseful parts of the movie to be separated with some of the most boring bits of film you'll ever sit through.

The 2 rating I'm giving "Death Curse of Tartu" is perhaps too generous, but there were glimmers of life in the last 45 minutes of so. If the director and producer had been disciplined enough to make a film 68 minutes instead of 84 minutes, maybe the 2 would be fully deserved. Perhaps this might even be a 3.

"Death Curse of Tartu" was made available for the first time on DVD via a "Something Weird Video" Floria-themed double feature extravaganza. The second half of the double-bill isn't all that good either, but it looks like a masterpiece next to this one.