A pair of successful lawyers (Higgins and Rudometkin) buy a pair of motorcycles and drag their wives (Hopkins and Waltz) on a mid-life crisis inspired Poker Run in the California desert. However, they fall prey to a pair of psychopathic bikers (Wisell and Thorne), who abduct the women and force the men to perform a series of murders that they frame them for. 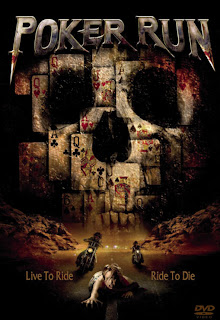 The strongest aspect of the film is the performance given by Robert Thorne, as the murderous master-manipulator who seems to have every resident of the California desert obeying his every psychotic whim in order to preserve their own lives. It also ultimately becomes one of the film's downfalls, because his control is so absolute and so far-reaching that viewers find themselves at a couple of occasions reacting more with a "Seriously?" rather than a "Oh, my God!"

Another performance worth mentioning is that given by Debra Hopkins. She gives such a perfect performance as a shrewish wife that I've not found myself wanting a character to be killed so badly since Barbara Shelley in "Dracula: Prince of Darkness".

"Poker Flats" is available in at least one DVD multi-pack where it is joined by two decent flicks and one weak one. It's worth the asking price when joined with other films--if you enjoy Killer Hicks movies--but I wouldn't waste my money on it as a stand-alone.