'Warlock' will cast a spell on you

A powerful, evil warlock (Sands) travels from the 16th century to modern day America to escape the witch hunter hot on his trail. The hunter (Grant) is more tenacious than he gives him credit for, and soon their battle resumes in 1989, with a young woman (Singer) who finds herself cursed by the warlock caught in the middle. 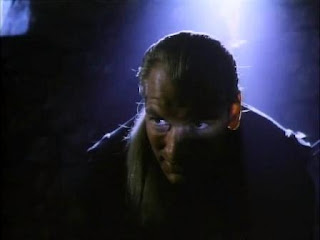 "Warlock" is a fast-paced, thrilling horror movies with numerous great moments and excellent performances by all the principles. The witch-legends it creates and how it uses them give the script a tremedmous freshness, and I am extremely impressed with the screenwriter's talent for crafting dialogue: Each character has is own "voice" and each sounds perfectly realistic (as far as time-traveling warlocks and witch-hunters are realistic that is).

Julian Sands gives perhaps his best performance so far as the boundlessly evil Warlock devoted to undoing Existence itself, while Richard Grant is almost as excellent as his world-weary foe. Singer is also good as a somewhat bubble-headed blond, a part that probably anyone could have played, but even she gets to shine during the scene where she is "nailing" the warlock's footprints, and during the final scene on the Utah Salt Flats.

This film is a prime example of how Steve Miner is one of the most underrated directors working in film; this 20-year-old movie is far more entertaining and scary than the vast majority of horror films being released today.


Posted by Steve Miller at 2:28 PM No comments: