A film of a child molester's nightmares?

Sisters Candy (Borden) and Cindy (Lynne) are left home for the night while their parents attend a wedding. Cindy receives a DVD called "Terror Toons". When the violent, insane cartoon characters of Dr. Carnage and Max Assassin leap from the screen into the real world, the cartoon violence soon causes real blood to flow. 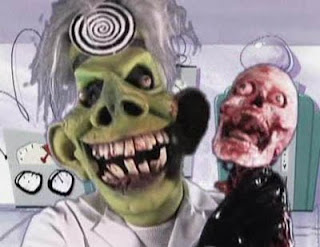 Regular readers probably have probably seen me rant multiple times about filmmakers needing to take their budget and available talent-pool into account when conceiving and executing projects.

"Terror Toons" is exactly the kind of horror film that SHOULD NOT be made on a tiny shoestring budget. It's abo an animated DVD (which looks atrocious) from which cartoon characters emerge to slaughter people in the real world (through painfully cheap effects and in costumes that look worse than the animated world they emerged from) and a need for copious gore effects (which the film's tiny budget apparently couldn't even handle).

There's also an issue with the casting. Candy in particular is problematic. I can't tell if she's supposed to be very young or simply retarded. In either case, the casting is bad, first and foremost because of the very, VERY bad boob job the actress is sporting. (And if she's supposed to be a young kid, then the sort of airbags she's sporting on her chest must mean she's the kind chick convicted child rapist Roman Polanski has nightmares about.) 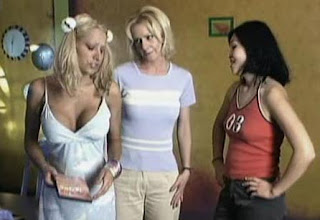 The difficulty of getting a read on what the viewer is supposed to make of Candy is perhaps also a problem with the script... it doesn't seem like the writers put a whole lot of thought into her or any other of the characters in the film; the two cartoon killers seem to be the most realized characters around. And then there's Satan and his monologuing. Huh?

We can add the direction and camerawork to the to the parade of awfulness that is present in this flick, although all i can say about either is that aside from there obviously was a camera present, I'm not convinced the person running it had much in the way of an idea about how to set a scene. And the acting... it is almost uniformly awful. Lynne and Lui are the only two appearing that seem to have even an iota of talent; everyone else deserves to be murdered by cartoon characters come to life for thinking they should appear on film.

With all the negativity I'm spewing at this film, why did I give it even Two Stars? Well, I'm giving some credit for Lynne and Lui, a couple of semi-bright spots in the otherwise pathetic cast of actors. I'm also giving some credit for some nice looking sets once the cartoon characters invade the house and transform it into a cartoon-house (the place still looks like someone's basement or trailer, but at least some effort was made). I'm also giving some consideration for a neat idea, even if it was one that was far beyond the meager means and talent that were available to execute it.

"Terror Toons", despite a concept that seems appealing to lovers of weird movies, is a film that the vast majority of us are better off avoiding. However, it should be required viewing for those of you out there thinking about making your own movie. It's an illustration of why you need to plan your project carefully and realistically before you start. It's a film that the people involved simply were not able to do justice, and you can learn from their example and not repeat their mistake.