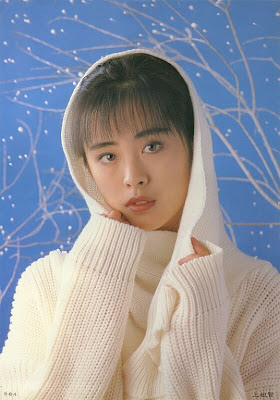 Joey Wang (star of "Chinese Ghost Story") wards off the cold and a different sort of chill, because she knows that in December, things really get going here at Cinema Steve's "Terror Titans". I'm introducing the weekly Saturday Scream Queen series where you'll find a mini-profile of a different actress every week..
Posted by Steve Miller at 2:12 AM No comments: 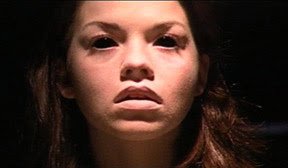 "GhostWatcher" is a neat ghost movie that, despite being made on what is obviously a very low budget, it's more entertaining than many films with one hundred or perhaps even a thousand times the budget this was shot for. It's got a nice idea at its center--a phony ghost investigator gets drawn into a real haunting involving a particularly nasty ghost--and director David Cross and his cinematographer Dan Poole have a good eye for building suspense through visuals... there were a couple of scenes early in the movie that gave me Hitchcock flashbacks. If the editing had been a bit tighter, there could even have been some moments that might have rivaled his films for tensions and terror.

The script could have used more work (there are more examples of bad dialogue than good, and there are logic fallacies that strain even the most generous-minded viewer's ability to suspend disbelief), the acting is inconsistent (Byrnes and Servary are excellent in some scenes but awful in others... although this may arise from weaknesses of the script, as actors are often only as good as the material they have to work with), and the film ends in a confused mess of badly motivated character actions that are founded in the dictates of plot instead of character and good story telling.

I believe that if Cross had taken it through a draft or two more, he would have realized that Elizabeth Dean behaves in an utterly unrealistic fashion during the second half of the movie, even if we allow for the possibility that Cross was shooting for some sort of extreme version of a "hooker with a heart of gold" idea for her character. (I can't go into detail about how Elizabeth's behavior is unrealistic without spoiling several of the films major plot-twists, but this already neat character could have been so much more impressive if only she had been better developed.

With a more polished script, slightly tighter editing in a number of scenes, this film would have been very impressive. I'm going to have to seek out a copy of "Ghost Watcher II", because if Cross learned anything from this first film, I'm certain the sequel is superior.

(At the very least, he'll probably have a zombie that looks a little less like a member of the Blue Man Group down on his luck. That make-up added much unintended hilarity to what otherwise was one of the film's creepiest and most effective sequences.)

'Haunted Forest' is a good
but flawed spook show

A group of twenty-somethings are stalked by a madman and the vengeful spirit of an Indian maiden who haunts an isolated stretch of forest. Will Sean (Di Cione) be able to interpret the secrets contained in his grandfather's diary before it's too late for everyone? 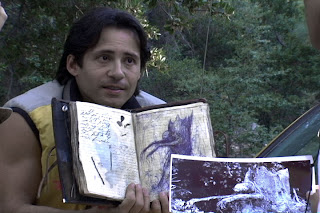 "Haunted Forest" is a spooky little ghost movie that borrows its good bits from Japanese ghost movies of recent years but dragged down by an overcomplicated script and lapses in story logic.

The ghost that transforms people into trees would have been plenty scary without the uninteresting, crazed trapper that serves as her "Igor." (And why does a ghost that moves easily through the entire forest need someone to help her trap victims anyway? I suppose the filmmakers were trying to throw in a red herring in regards to whether the events were supernatural in origin or not, but it's so very clear early on that they are that the trapper is redundant.)

The film's strongest point is the cinematography. The film gets a lot of mileage out of what was probably a very tight budget thanks to creative camera-work. It also goes a long way to making a beautiful forest into a very scary place.

The film also succeeds to the point that it does thanks to some well-written, believable characters. It's nice to see that some horror writers can still write tales that are character-driven rather than relying on gore or special effects to generate horror and tension. In fact, this film also relies on a time-honored ghost movie rule as far as the gore goes--less is more. There is very little splatter in this film, but what is present is as a result very impactful.

If the script had been tighter, this would have been a top-notch film. It's still worth seeking out if you're a big fan of ghost movies, but it's not a "must-see."