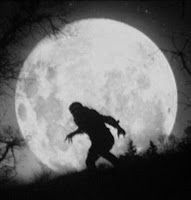 On August 29th, 2015, it's a full moon... and a great excuse to invite some friends for a mini-film festival (or, if you will, a Bad Movie Night) featuring killer doll movies from Full Moon!

Here are write-ups of the three movies to help convince of what a good idea this is!

When a vicious Gestapo commander (Lynch) murders his beloved wife Elsa (Douglas), Andre Toulon (Rolfe), a puppeteer with the ability to bring his puppets to full and independent life, turns his creations from instruments of mirth and entertainment into tools of hatred and revenge. 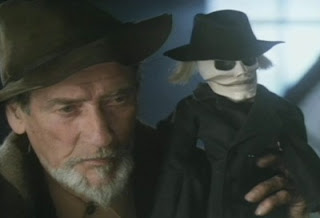 "Puppet Master III: Toulon's Revenge" takes viewers back to a time fifty years before the events of the other films to fill in some of the backstory of the magic puppets that are the main monsters of the film, and to explain why they and their creator is so hate-filled and driven by an urge to destroy.

(It's not quite in step with "Puppet Master II", but then it doesn't seem to fit well with anything else in the series. As a matter of fact, none of the various Puppet Master movies are perfect fits for each other as far as continuity goes.)

The film has a cast that's each perfect in the role that they play, with the classical-featured Guy Rolfe as Andre Toulon and ferret-faced Richard Lynch as the despicable Major Krause being giving especially noteworthy performances, and a script that actually feels like it could been lifted from a horror movie set during the time the film takes place. (In fact, the pacing of this movie and the style of the dialogue is one of the things that makes this movie so good... it has a classic 1940s-era horror film feel to it, while still delivering all the Full Moon stop animation and creepy puppets that we expect. Leech Woman is as gross here as she ever was. That we witness her tragic origin makes her even grosser in some ways' I wonder if Toulon ever had a lucid moment in which he asked himself, "Why in God's name did I do that to what was supposed to be an immortalization of my wife's beauty?!")

"Puppet Master III" is a film I think any lover of cheesy horror flicks can find something to like in. (Plus, we get to watch Nazi Ubermenchen be killed by tiny puppets while shrieking like schoolgirls. How can you not love a movie like that?)

Police Detective Judith Gray (Scoggins) pursues gunmen who have just murdered her partner and father of her unborn child (Weston) into a warehouse full of toys. When a demon (Cerny, voiced by Stoeckle) that has lain dormant for decades under the building's foundation senses her, it decides her baby will be its physical form and it animates toys in warehouse to capture her and kill everyone else inside. Will Judith, together with a teen runaway (Dunning), a hapless fast-food delivery boy (Mitchum), a lazy security guard (Schrum), and a mad-dog killer (Russo) be able to fend off the demon and his cute-but-deadly minions, or will she become the unwilling mother of Hell on Earth? 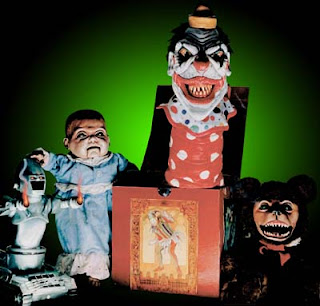 "Demonic Toys" is another highly entertaining movie from Full Moon's Golden Age of the early 1990s. It offers a perfect blend of horror and comedy, and it's a far creepier movie than the demon-possessed toys that are its main selling point led me to believe.

In fact, while much of the film is definitely played tongue-in-cheek, the concept of a demon seizing a woman so it can possess her unborn child is one that creeps me out just thinking about it. The concept is made even creepier in execution here, as the demon generally presents himself as a little boy (played on-screen by child actor Daniel Cerny, but voiced with great effectiveness by Robert Stoeckle). Seeing a child talk about spiritual rape and murder is very, very disturbing.

The whole "demon replacing the soul of an unborn child" plot of the film actually adds some (perhaps inadvertently) depth and controversy to the film. Judith is barely one month pregnant, yet the film makes it clear that her fetus is most definitely already a baby, complete with a soul that is looking forward to being born and experiencing life on Earth. Fanatical pro-abortion supporters should stay away from this flick, but those right-wing pro-lifers in the audience should check it out (at least those of you who don't mind foul language used with great comedic effect).

The acting in the film is good all around, with the aforementioned Robert Stoeckle providing a great demon voice, and Bentley Mitchum coming across as a young version of Bruce Campbell's Ash from "Evil Dead 2" as he battles the killer toys. Leading lady Tracy Scoggins has a tendency to chew up the scenery, but in a movie featuring demon-possessed killer toys a touch of overacting isn't that big a deal. 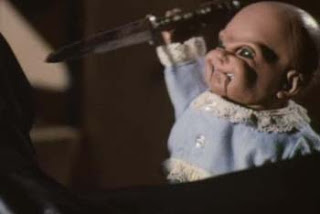 Other noteworthy players in the film are the toys of the title. They are more funny than scary, but that's intentional on the part of the filmmakers. In fact, the knife-wielding, foul-mouthed Baby Oopsie-Daisy (and its uncredited voice actor) has some of the film's funniest moments and best lines. The puppetry and stop-motion animation used to bring the toys to life are very well-done, particularly in the case of Baby Oopsie-Daisy, the killer teddy bear, and the toy soldier who joins the fray late in the film. However, as funny as the toys are, they inflict some very gruesome deaths on some of the characters, and thus give rise to some displays of gore effects that are as impressive as the craftsmanship involved in animating the toys.

This is a fun romp of a movie. If you're looking for some comedy-tinged horror that might even inspire a thought or two as the mayhem unfolds, "Demonic Toys" might just be the film for you.

Eccentric inventor and toymaker Robert Toulon (Feldman) and his teenaged daugther Alexandra (Keaton) recreate the secret formula that can bring inanimate objects to life, and they use it to revive some of the puppet's created by Robert's grand-uncle Andre Toulon--Blade, Pinhead, Jester, and Six-shooter. It's a good thing they do, because the sinister president Erica Sharpe (Angel) of Sharpe Toys has been selling demon-possessed toys which will come to life Christmas morning and kill millions of Americans, sacrificing their souls to the demonlord Bael (Falk) and elevating Erica to ruler of Earth. Only the Toulons and the magic puppets can stop them... if they survive long enough. 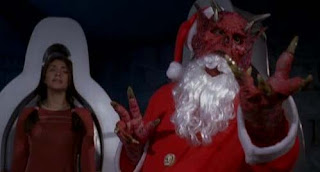 "Puppet Master vs. Demonic Toys" is one of the better movies to come out of the Sci-Fi Channel's original programming department. Yes, it's goofy and illogical and the special effects won't be winning any awards, but it's a fun and funny movie.

Although the creator of both the Demonic Toys and the Puppet Master concepts, Richard Band, had no direct part in the creation of this film, the presence of an old-time Full Moon script-writer (C. Courtney Joyner) and a director who worked on a number of Full Moon features (Ted Nicolaou) the spirit of the original movies is alive and well in this one. In fact, it's better than much of what Band has been producing and directing lately.

Corey Feldman in particular is great fun as the gruff grand-nephew and last male decendent of the Toulon line, and teenaged actress Danielle Keaton gives a nice performance as a cute and well-mannered kid who patiently puts up with the dad's weird nature. The father/daughter relationships in this movie is one of the things that makes it such an interesting film, particuarly when the Toulons are considered in the light of the relationship that Erica Sharpe must have had with her father. There's nothing deep here--like most films from the brain-trust that is/was the Full Moon gang, the emphasis is on gags, gimmicks and gore rather than characterization--but it's enough to make us interested in the characters, enough to make us care.

If you're looking for an unusual movie to mark the Christmas season, "Puppet Master vs. Demonic Toys" could be the one to reach for. There might be a few too many fart jokes and exploding eyeballs for grandma's sensibilities, but I think most kids will get a kick out of it.

Posted by Steve Miller at 9:58 PM No comments: