Boredom rises from the tomb
in 'Mummy Raider'

When Kristen (Caine) is abducted by a Neo-Nazi scientist (Larocca), it's up to adventuress Misty (Mundae) to save her before an ancient evil mummy is resurrected. Will even Misty's considerable skills at shooting, Kung Fu fighting, and lesbian seduction save the day?! 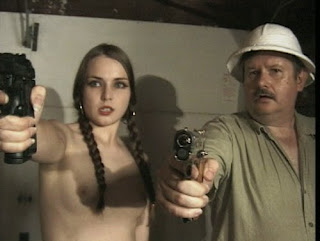 Zita Johann was sexier in the 1932 Universal film "The Mummy" fully clothed than any of the ladies are in this flick. Yes, the girls here are very attractive and the casting appears to have been done so there's a breast-size to meet your oogling preference... but you've got to be REALLY hungry for naked flesh to sit through this one.

Add to the drawbacks what is one of the very worst mummy costumes that has ever been put on a film that people were expected to pay money to see, and you've got something that's not even worth the time it'll take you put the disc in your DVD player.


Posted by Steve Miller at 1:03 PM No comments: Links to this post

Interesting movie choked under
a crushing amount of padding

James Eastman (Smith) is a dhampire, a creature who is part human and part vampire. He has spent his adult life tracking the vampire (Pataki) who raped his mother... and the final confrontation is close at hand. 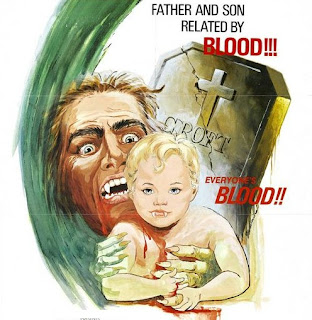 "Grave of the Vampire" is noteworthy for horror fans, because it actually contains a greater amount of material based on actual vampire myths than 99 percent of the vampire fiction, comics, and movies out there. While the film does give its vampire a strangely magnetic personality, he is primarily just a brutal monster.

Unfortunately, the movie is also very, very slow with redundant scenes that drag on and often establish the same plot point multiple times in different ways. It doesn't so much feel padded as just drawn out and in need of an editor. I suppose that given it was probably made with distribution to drive-in theaters in mind this might have been a good approach, because couples could make out and still have a chance of following the movie... but for the modern viewer waching it on TV, this lends itself to a boring rather than thrilling experience. (Although... maybe that's just the case for old fogeys like me. Current teens can now make out in the comfort of their parents' TV room and follow the movie at the same time!)

Another strike against the movie is the acting. The acting ranges from blah to horrible. Michael Pataki is creepy as the monstrous vampire rapist, William Smith is decent as the dhampire out for revenge, and Eric Mason is passable as a police detective tracking the vampire early on, but most of the other actors display how little talent they have instead of the other way around.

Director John Hayes does deserve some credit for enfusing the film with a steady, oppressive, downbeat mood. Despuite indifferent camerawork, he makes great use of lighting and fog machines to create an atmosphere that manages to convey chills to the viewer despite the film's flaws. With some heavy editing this could have been a scary little move, even with the substandard actors. The story has plenty of potential... the execution was just botched.


Posted by Steve Miller at 5:44 PM No comments: Links to this post