'Pitch Black' is a neat fusion of action, sci-fi and horror

In the sci-fi/horror flick "Pitch Black," a passenger ship is heavily damaged by the tail of a rogue comet and crashlands on a desolate planet. Only a handful of passengers and one crewmember, Fry (Mitchell), survive, and they find that they must put their faith in Riddick (Diesel), a violent, murderous criminal who was being transported on the ship if they are to have any hope to survive. However, they soon discover that Riddick isn't the most dangerous creature on the planet--caverns under the surface are teeming with deadly, flesh-eating beats. The upside is that these beats are extremely sensitive to light, and the planet has three suns. The downside is that the planet is about to be plunged into a total eclipse that may last for years. 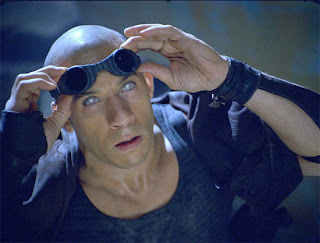 "Pitch Black" is an excellent horror flick of the kind where a small group of people must survive the night against an onslaught of mysterious monsters. It sticks pretty close to the genre conventions, but it uses them to their full effectiveness, never allowing them to become an excuse for lazy storytelling or sloppy filmmaking. It's also one of those movies that shows that excellent filmmaking and judiciously used CGI can indeed happen in the context of a small budget.

The acting is great all around, the story has enough twists and turns to keep the audience guessing, and there isn't a single example of "stupid character syndrome" (where characters do something dumb just because the plot dictates it) anywhere in the film. The deaths at the hands of the monsters come so suddenly that they never lose their impact, and the very last one is perhaps the most startling of all.

I imagine there are some who will fault this movie for having a "Hollywood Ending"--like the person I watched it with did--but I think that's ignoring the way some of the character deaths were handled, as well as the character of Riddick. (Or maybe they might forget to consider the way characters like Riddick have been handled in recent horror, suspense and action flicks. It's been a while since a movie has actually allowed a character like Riddick to truly transform as the story progresses.)


Posted by Steve Miller at 12:01 AM No comments: Links to this post

Glasses are as effective as crosses
when warding off Count Yorga

The vampire, Count Yorga (Quarry) seemingly sets his sights (and fangs) on every woman he meets, except one, proving a historical fact: In the 1970s, vampires didn't make passes at girls who wear glasses. Meanwhile, their incredibly boring boyfriends try to save by slaying the undead fiend. 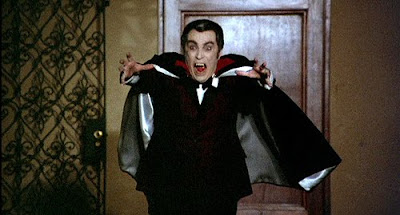 "Count Yorga, Vampire" is not a movie that's aged well. First off, while the film is more overtly eortic than any older vampire movie I've seen--reflecting the filmmakers attempt to be part of the "sexual revolution"--it's surprisingly unsexy. Also, the flat lighting of most scenes, the indifferent photography, the bland performances n the past of the cast, and complete humorlessness of the proceedings cause this to be a somewhat dull experience that picks up in the film's final 15-20 minutes where the heroes invade Count Yorga's lair and confront him and his white-nightgown-clad vampire brides.

This film features the only 1970s vampire sequence that's as unnerving as the basement scene in "Satanic Rites of Dracula"... and the scene where Dr. Hayes has his showdown with Yorga and his vampire brides is also a fabulous bit of filmmaking. Even better, the film features a surprise shock ending that actually works, a truly rare and precious thing.

Although you'll have to sit through a predictable and uninteresting first hour, the final third of "Count Yorga, Vampire" will make it worth your while. It's hardly a must-see, but if you enjoy vampire films, you can do worse than this one.

Posted by Steve Miller at 5:51 PM No comments: Links to this post