'Deadfall Trail' is a chilling tale of survival

Experienced outdoorsmen Julian (Dean) and John (Hall) head into the Arizona wilderness together with obnoxious city-boy Paul (Gray) for a survivalist camping trip. When John is seriously injured, Julian apparently suffers a psychotic break and Paul finds himself needing to learn the ways of the wilderness quickly if he is to have any hope at all to survive. 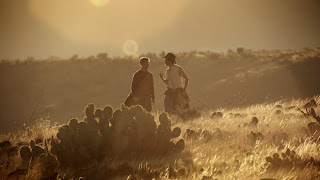 "Deadfall Trail" belongs to the "backwoods survival" horror subgenre, but it is refreshingly free of psycho hicks, toothless townies, and dialogue containing the words "squeal" and "pig".

What it does have are some nice performances by its three stars, each of them coming across as totally believable in the parts they are playing. Shane Dean, as Julian, is particularly noteworthy and interesting to watch, as he does an excellent job of keeping the audience guessing as to whether he is really a dangerous psychopath or just a socially awkward jerk.

Supporting and augmenting the great performances is equally excellent technical work in the photography and sound department. This film has a professional look about it that is entirely too rare among the low-budget pictures that are common stock of distribution labels like Midnight Releasing, Brain Damage Films, and Chemical Burn. I can't even complain too much about the quality of the script... the dialogue and the characters all seem mostly believable. Heck, it even has a "shock ending" that works! Even better, director Roz seems to practice the old adage that "less is more" when it comes to scenes of gore and violence; he leaves our imagination to fill in the details of the film's more horrific scenes, something that lets him avoid the need for prosthetic effects that his budget probably wouldn't be able to support if they were to be done right. It's an approach I wish more low-budget filmmakers would consider taking, as it would make them appear as if they actually knew what they were doing. (Here--most of these movies can show you how it's done.)

That's not to say that "Deadfall Trail" is perfect. There are a couple of moments in the film that were presented to establish aspects of the characters but which also have the feel of "rifle over the fireplace" moments, but we never come back to them. I'm the kind of person who perhaps over-analyzes films I'm watching, but the fact the metaphorical rifles never got fired annoyed me enough to be distracting as the film moved through its climax and I realized that there would be no pay-off to what seemed like perfect set-ups.

Despite minor blemishes, I recommend checking out "Deadfall Trails", especially if you are a fan of the "man vs. nature" or "backwood horror" genres.