Skip the prequel, go straight to this one

A group of scientists cut off from the rest of the world in Antarctica must deal with an ancient creature that is capable of taking on any form it desires... and that is bent of killing them. 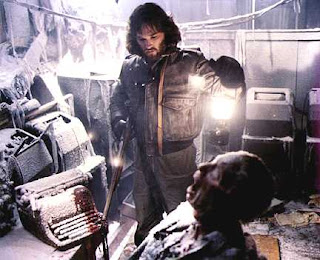 As I sat down ot watch this movie, it dawned on my that I've never actually John Carpenter's version of "The Thing" before. Well, I should have filled that hole in my trashy movie knowledge long ago!

In fact, it may be a little too perfect. Because it is so exactly constructed according to the pacing and template that has evolved from "White Zombie" through "Creature from the Black Lagoon" to "Baron Blood" and Carpenter's own "Halloween", few things here surprised me. I was creeped out and shocked at a couple of times, but it pretty much delivered what I expected it to, when I expected it, and pretty much in the manner I expected it.

The one exception is what follows after one of the team members has a heart attack. While I knew something was going to happen, I did not expect what DID happen, nor where it went from there.

If you want to see an extremely well-made horror movie, check out "The Thing". It might not have brought anything new to the genre, but it's still far, far better than 90% of the films being made today.