'The Tomb' could have stayed interred

A successful writer and college lecturer (Bentley) is drawn into the schemes of a strange Russian graduate student (Skya) who is trying to prevent her death from an inherited disease by trapping and draining energy from human souls. 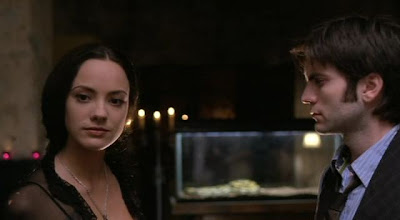 I used to think that H.P. Lovecraft stories were the hardest horror genre pieces to adapt to film. Now, I'm starting to wonder if it might not be the works of Edgar Allan Poe that deserve that honor.

There seems to be two general category of Poe adaptations: Ones that have little in common with the source material except the title, and ones that mistake fatalistic romanticism with deadly dull. There is cross-over between the two categories, and every so often a Poe adaptation comes along that is faithful to the source without being boring, but they are few and far between.

"The Tomb", as the U.S. title might clue you into, draws its inspiration equally from the Roger Corman Poe adaptation "The Tomb of Ligeia" and the Poe story "Ligeia". However, it lacks the energy of Corman's film--everyone seems very, very bored to be making this picture, especially the leads--and the director mistakes cliched and overused horror film techniques with actual attempts to build suspense and dread. Can we PLEASE stop with the missing frames?! It was mildly annoying but nonetheless disconcerting when filmmakers started doing it. Now it's just obnoxious, especially here where its used for no discernable reason.

The best thing about the film is that the Eastern European setting made me want to watch films like "The Subspecies" series and even "Mandroid" that, because they feature the sane moody environments without being boring. Hell, even "Talisman" is more interesting than this film.