I wish this film had been invisible, like its monster

Mad scientist Professor Orloff (Vernon) has created an invisible, artificial humanoid that he plans to use to conquer the world... while protecting his daughter (Carva) who was traumatized after being buried alive at 16 and nearly murdered by grave robbers when she came to. 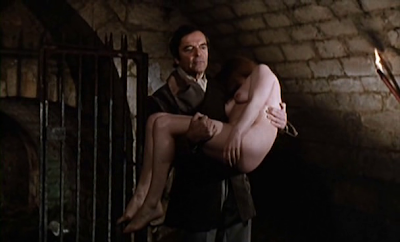 Obstensbly a sequel to Jess Franco's "The Awful Dr. Orlof", a surprisingly effective film by Franco standards, "Orloff Against the Invisible Monster" is an embarrassment when compared to it. It can barely stand in comparison to Franco's later pictures and many of those are pretty awful.

In fact, this film is so incoherent and has such a botched, anti-climactic ending that I have to give the director credit for perfectly mimicking all the elements that make most Franco films such piles of garbage... even down to the invisible creature going on a rape-rampage in the film's third act after Orloff decides to unleash it on a serving girl who he thinks betrayed him. But it's not just rape for the sake of rape... Orloff wants to study the creature's sex drive or some such rot. Yep, the creature that is to protect his frail daughter needs to be willing to molest and rape... seems legit! And about as sensible as everything else just about every character does in the picture.

Sometimes, these films are worth sticking with because they offer unintentional comedy or because there's some other sort of pay-off in the end. That is not the case here. What is intended as comedy falls flat or is repulsive, and there is no unintentional comedy anywhere. And if one sticks with the movie in the hopes that things get better, one will be very disappointed, because Chevalier is such a protege/mimic of Jess Franco that he even gives the film an ending so incredibly lame that he may even have topped the master of lame endings himself! (Note to would-be filmmakers: If you don't have the budget to show castle in fiery ruins at the end of your film via a model or stock footage, and don't even have the budget and/or skill or sense to blow a little smoke in front of the camera in an attempt to make it appear the survivors are standing near a burning building, you probably shouldn't end your movie with a fiery climax. Also, don't have your monster get killed by a deus ex machina "plot twist".)

The only things that saves this pile of rubbish from a Zero rating is that Howard Vernon gives an appropriately sinister performance that is actually better than the film deserves. Further, Chevalier does manage to evoke a creepy mood on several occasions, taking full advantage of the real castle and its dark cellars in which the film was shot.

Most viewers will rightfully dislike this movie. However, if you are among those who consider yourselves fans of the Jess Franco Style, you might enjoy this pastiche of his... um... cinematic flourishes.