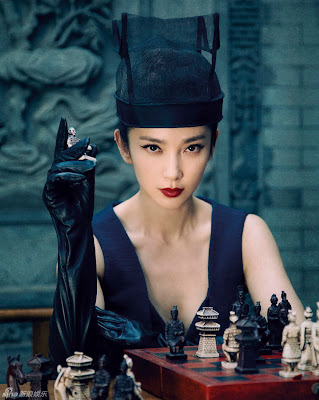 Bingbing Li's star has been in ascendance both in her home country of China and internationally since her award-winning film debut in the 1999 drama "Seventeen Years". She is presently one of China's most popular actresses.

Li's horror resume is rather thin, as her career has comprised mostly of period pieces of the action/adventure or romantic variety, but she did have a spectacular turn as the iconic evil sorceress Woman with White Hair in 2008's "The Forbidden Kingdom", a cinematic tribute to Chinese mythology has its been translated to the big screen for the past 50 years. That year, she also starred in "Linger", as a woman who is visited by the ghost of her boyfriend who died three years earlier.

Next month, however, Li officially is added to the ranks of horror movie actresses, as she joins the line-up of zombie-killing beauties of the "Resident Evil" series in the role of the shadowy corporate spy Ada Wong.

"Resident Evil: Retribution" opens across America on September 14, 2012. Be sure to go and check out Li in glorious 3D. Meanwhile, come back here next Saturday for some bits of information about another of the Scream Queens who will be making sure the zombies stay dead this time.