If you end up watching 'Wrong Turn',
you may have chosen badly.

Welcome to the first Wrong Turn Wednesday... even if I'm already starting to regret the decision to watch and reveiw these flicks as part of the build-up to Halloween..

A group of twenty-something beautiful people are stalked and brutally murdered by mutant cannibal hicks in the deep woods of West Virginia. 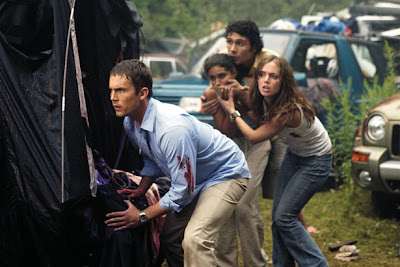 If you've seen even one killer redneck movie, you've already seen everything "Wrong Way" has to offer. They may do it better here--depending on what film you watched--but it brings nothing new to this slasher film sub-genre. The characters you expect to survive do so, and the characters you expect to get killed fall in predictable order. The film feels like the writers and director were working form a list of check boxes of genre tropes and once they got them all included, they felt their work was done.

There is nothing all that good about this film, but there is also nothing outright awful. The scene in and around the old observation tower is the high point of the movie (hurh-hurh... I made a pun), but it is nowhere enough to elevate this cookie-cutter, lazy genre film above its mediocre status.

What's more, the good will that scene earns this picture evaporates during the its climax where the filmmakers show us that not only are they not terribly original, they don't know when enough is enough and subsequently manage to transform the final fight stand of the Beautiful People against the Hideous Hicks from thrilling to ludicrous.

(By the way, filmmakers... if you want to make a movie about mutant cannibal hicks who have murdered so many people that they have a whole glade full of cars, you might want to NOT have them start killing cops and forest rangers. I can kinda-sorta accept that everyday people might be written off... but when it's law enforcement that starts going down, my ability to suspend disbelief goes down, too.

Unless you simply can't get enough of malformed cannibals haunting the back-country of West Virginia, or are a founding member of the Eliza Dushku or Jeremy Sisto fan clubs, "Wrong Turn" is a film you can safely skip.