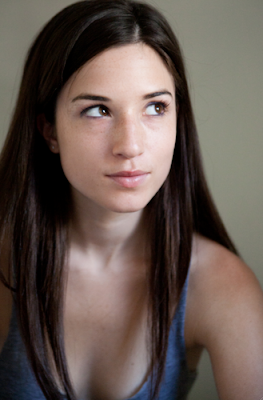 Jessica Whitaker is an up-and-coming young actress who was born and raised in Ohio, but who has studied  acting and music at schools in both New York City and Los Angeles, She has had bit parts on half-a-dozen television shows, including "Heroes" and "House", but it's her horror roles that interest us here.

Aside from a minor role in Bryan Ryan's off-center horror short "The Guest", Whitaker has starred in "Killjoy 3: Killjoy's Revenge" and "Killjoy Goes to Hell", both directed by John Lechago for Charles Band's Full Moon Features. Whitaker shows a great deal of charisma in these horror comedies, and I hope she'll become a Full Moon go-to brunette like Megan Ward and Charlie Spradling as she builds her career toward bigger and better things. She certainly has both talent and looks.