'Cold Storage' is a film that deserves
a wider audience

Clive (Searcy), a mentally disturbed mountain man, meets the girl of his dreams and commits to spending the rest of his life with her. Unfortunately, she's already dead, having suffered a fatal injury in a car accident near Clive's isolated shack. However, he isn't the sort of guy to let a little thing like decomposition get in the way of happiness. Nor will he allow anyone else to get between him and his true love, especially the living who might come looking for her, such as her strong-willed sister (Carter) and her looking-to-reconcile ex-boyfriend (Keeslar).

"Cold Storage" is a top-notch horror flick that gets just about everything right. It features a great script that refrains from giving into genre cliches so so it remains exciting and its developments unexpected remain unexpected up the very last moment. Made for just a few hundred thousand dollars, it's a film that puts movies made with budgets measured in multiple millions to shame.

This is a movie that could easily have been yet another slasher movie about cityfolk meeting hicks in the backwoods who when they aren't breeding with their sisters are killing strangers who happen along. Thankfully, director and co-screenwriter Tony Elwood created a far better film than that. In fact, he used the rural setting of the film as a means to make it even more suspenseful by playing against the typical Hollywood image of anything outside Chicago, Los Angeles, or New York City.

Most of the film's action takes place in or near a small North Carolina mountain town called Rainerspoint. While there are some decidedly freaky people living on the town's outskirts, the town itself is inhabited by normal, typical Americans and it is like any other small town you might visit anywhere in the country. The sheriff--played by Jeffrey Pillars--comes across as bigoted, lazy and a bit incompetent, but that's more out of the fact that he has very little to do with his days than outright malice, and his attitude and behavior is countered by a couple of the shopkeepers we meet during the course of the film. In general, the people of Rainerspoint aren't a bunch of toothless freaks just waiting to pounce on anyone who happens by... they welcome the tourists and it's clear that if anyone was aware of what was going on out at Clive's shack, they would have been horrified and taken action far sooner than they did. No one here is trying to cover anything up, but, like most Americans, they tend to mind their own business and assume the best about their neighbors.

By making Rainerspoint a typical small town inhabited mostly by friendly people, Elwood makes the creep factor (and ultimately the horror factor) of the happenings at Clive's shack that much more frightening and intense. The weirdness of Clive isn't diluted by surrounding him with equally weird and scary neighbors--with one exception... and that neighbor is probably worse than Clive. Elwood further deploys set and lighting design to contrast the normality and the town with Clive's private world in the forest; the scenes in the town are all in clean, brightly lit places and the sun always seems to be shining on the street, but Clive's place is full of filth, deep and dark shadows and it always seems to be overcast or raining. It's a powerful approach, and it's one that shows that productions and scripts developed with thought and care will deliver powerful experiences no matter what the budget.

"Cold Storage" is as good as it is because of the great care that has been taken in creating it. During filming, it's clear that Elwood understood what to show and what not to show in order to build suspense, and it's equally plain that a good deal of post-production work took place. For countless reasons, post-production is where the mistakes that cause many low-budget films not to reach their full potential, mostly because the filmmakers cut corners. Oftentimes, it's the color correction process or the sound design/re-recording that drags a movie down. In the case here, viewers treated to big-budget post-production quality on a small-budget film. And it shows.

The film also gains much of its strength from its script. I've already talked about the intelligent portrayal of Rainerspoint, but the quality of the script also shines through in the way the story unfolds at a perfect pace. Although we know full well that the two main characters, Cathy and Daric, won't find Cathy's sister alive, the gradual revelation of exactly how insane Clive truly is ensures that the viewers will be on the edge of their seats when the inevitable confrontation with Clive happens; it's an encounter where we know someone will end up dead, and it will probably be one or both of our heroes.

Speaking of heroes... this is another area where the film excels. It features a cast of very talented actors who take the excellent material provided to them in the script and bring it fully to life.

Nick Searcy gives a spectacular performance as the deranged Clive that makes the viewers feel sympathy for the character even as he repulses and terrifies us. It's a performance that displays both acting and scripting of a caliber that is all-too-rarely seen in films.

Joelle Carter is also noteworthy as Cathy, who portrays a stubborn, confident woman deeply concerned for her sister. It's a part where she easily could have come across as bitchy, but she never does. Similarly, her character comes across so clearly that when she does something very, very stupid toward the end of the movie, it seems perfectly natural for her to do so, instead of an example of Stupid Character Syndrome (where a character's brain stops working because the plot needs him or her to do something so the story can continue). 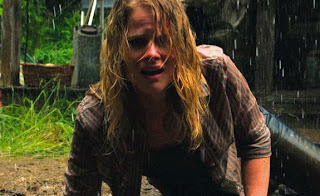 "Cold Storage" isn't perfect--it DOES have one example of pure Stupid Character Syndrome [although, maybe not, because the character being boneheaded and putting himself in danger because of it doesn't seem very swift to begin with] but this is small flaw is heavily outweighed by the superior quality of everything else in the film.

"Cold Storage" is, sadly, still looking for a distributor, so it may be a while before you'll have a chance to see it. I sincerely hope that someone has the good taste to snatch up this film, because it's head and shoulders above most modern horror films.

To read more about the film, visit the office website by clicking here.