An island of missed opportunities 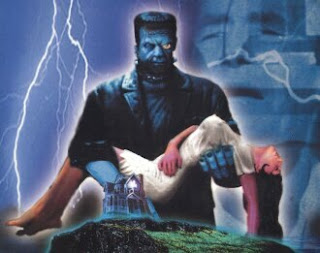 Despite a crazy mix of elements--any one of which could have brought some excitement to this film--"Frankenstein Island" is a crushing bore from beginning to end. The dull 'heroes' wander around not doing much of anything--even the Kung Fu fight versus the zombies who all look like they just walked out of a beatnik cafe is boring--and the villains aren't much more active or effective.

The biggest shame of the movie is how badly everything is executed. The writer/director was clearly going for a cross between a "Lost World" film and a "Mad Scientist on a Rampage" movie, but he was not competent enough to capture the feel of either genre, and he botches even the simplest elements. (Worst offense: He doesn't make full use of the bikini babes... one should have developed a romance/association with one of the heroes early on and then should have been following the around. At the very least, we would have had something nice to look at while struggling to stay awake.)

Another missed opportunity was the identity of Sheila Frankenstein's husband. When he was first brought up in an ominous way, I was hoping he would be revealed as as the Frankenstein Monster. Alas, this was not to be. Sheila's mysterious husband turns out to be one of the more boring elements of the film.

"Frankenstein Island" is not a place worth visiting.