A maniac killer (Ernsberger) descends upon a small town, butchering random people that annoy him. When he kills Ash's adopted father (Loughlin) and kidnaps Ash's girlfriend (Liles), Ash (Boswell) and his best friend Calvin (Creter) take it upon themselves to end his rampage.

"Killer" is one of those movies that shows that when it comes to movie-making, creativity, skill and talent is more important than big budgets. Made for just $9,500 over a couple of weeks in the late 1980s, it towers quality-wise over films made with one-hundred times that amount of money.

Although far from perfect--some of the acting and writing leaves a little to be desired in spots, and there are several shots where you can tell they were quickly losing daylight--these flaws can be overlooked because of the raw intensity of the overall movie. Shot on Super 8 film with mostly handheld cameras, it has the feel of a much older movie. It feels like it dates from the early 1970s, as the slasher subgenre was being defined, but it incorporates fully mature tricks and techniques, making it a unique film experience. 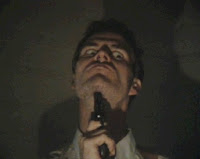 What is also unique is the performance given by Duke Ernsberger. He gives one of the creepiest, most intense portrayals of a maniac murderer ever captured on film. His tour-de-force performance in the last half hour of the movie--from his chilling conversation with the captured girl about how he is going to slowly slice pieces off her and eat her while she's still alive (and thus fulfill a life-long dream, to his his monologue about how the doctors in the mental hospital drilled holes in his head and allowed his soul to escape and thus made him immortal, to his crazy Russian Roulette gamel, and the extended final chase scene--is one that ranks among the greatest screen maniac performances. I've no doubt that if this film had been made by "serious filmmakers", Ernsberger would have won all sorts of awards and accolades for it. (Forget Jack Nicholson's annoying display in "The Shining". Ernsberger delivers the REAL goods! It's too bad he hasn't appeared in more movies than he has.)

The label "cult classic" gets slapped on a lot things by marketeers and overzealous critics. Mostly, it's code for "this thing sucks, but let's trick people into buying it", but in the case of "Killer" it's well-deserved. It's a movie that deserves a lot more attention that it's ever gotten, and it deserves it now more than ever with a DVD release that features a re-edited and ditially cleaned-up version of the original film with a new soundtrack. It's a film that should be seen by anyone who is a fan of the slasher films--and it's an absolute MUST if you consider yourself an aficionado of the genre.

The DVD director's cut of "Killer" is available from Amazon.com and it's worth every penny. In addition to the movie, the DVD contains an interview with director Tony Elwood and screenwriter Mark Kimray that is interesting and informative--unlike the usual self-congratulatory and/or infomercial crap that often passes for interviews on DVDs--and a second audio track on the film that has Elwood and several of the cast members discussing the shoot and commenting on the differences between the original release and the re-edited DVD version. It's great stuff and well worth the time to sit through.

All in all, this is a DVD that belongs in the library of every fan of the horror film genre.