Just leave this one alone and in the dark

Edward Carnby (Christian Slater) is a paranormal investigator who has spent the last several years trying to unlock a mystery in his past that is somehow tied to a mysterious prehistoric culture. He is on the verge of finding his answers when a series of nonsensical events surrounding invisible monsters, a girlfriend played by an apparently bored actress (Tara Reid), symbiot-infected government agents, and a for-no-apparent-reason-bitter co-worker from the government's paranormal research branch Dept. 713 (Stephen Dorff) erupt. 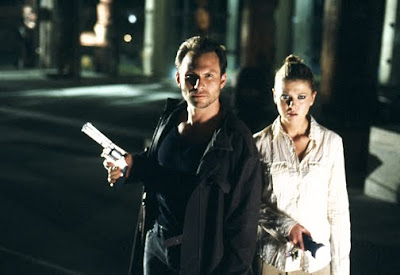 This movie starts with a dull bit of exposition, and it doesn't get much better. It's a mish-mash of half-developed story elements and non-developed characters played by actors who in most cases seem like they know they're in an awful film so they're not even trying. The monstrous threat is self-contradictory (the critters are loose in the world, yet they're not... the critters are stopped from invading the world, yet they've depopulated it by the end). The super-secret, heavily armed government agency set up to deal with supernatural threats have been fighting the growing monster menace for years, yet they go to face it repeatedly in the film without the fairly simple, easy-to-come-by methods to weaken it. (The creatures are vulnerable to light. Private citizens can rent light towers with gas or battery powered generators, yet the hi-tech, paramilitary Dept. 713 can't lay their hands on any.)

Maybe the problem is that the three writers on "Alone in the Dark" never showed each others pages to one another before rehearsal and filming started?

There is nothing nice to say about this film, except maybe that it moves fast enough to not get boring. For that, it gets a very generous One Star. I knew I was watching garbage, but it kept me mildly entertained. I still wish I had the time back I spent watching it, and I don't recommend you waste yours on this film.