'Legend of Sorrow Creek' has a few good moments

Four friends (Caron, Deitcher, Ravensbergen, and Turner) cut through a patch of haunted forest and draw the attention of wrathful spirits. 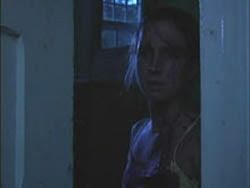 "Legend of Sorrow Creek" is a well-acted and well-filmed horror movie that shoots for a "Blair Witch Project" sort of vibe within traditional filmmaking approaches instead the "found footage" route. It's a low-budget horror film with a professional look to it, mounted by a director who obviously understood how to work within his means, and which delivers several genuinely scary moments.

However, the film is done is by an underdeveloped script (by director Penning) which relies on the characters behaving in idiotic ways in order to keep the plot moving forward, and which just sort of fizzles to a close (after perhaps the most astounding display of Stupid Character Syndrome ever put on screen) instead of ending with an explosion of horror. Perhaps even more damning, the film has a wrap-around sequence that features its worst actors and lamest dialogue, and which makes little sense in the context of the rest of the movie. I think something like it was needed for the film, but this wasn't it, and it's the most blatant sign that the script needed a lot more attention that it got.

If you like horror films with a "spooky forest" motif, or ones that revolve around "beautiful young people in trouble," this might be a film worth checking out. It's not exactly awful, but the shaky script foundation that supports the respectable efforts of the cast and crew result in a film that's not worth going out of your way for either. (I came across it in a set of eight different movies, among which were gems like "Prom Night", "Below" and four Charles Band productions. and in that context it's harmless filler. But I wouldn't bother with a stand-alone DVD unless you were renting it cheaply.)