A disgraced FBI agent (Eckhart) becomes the target of taunts from an apparent serial killer (Kingsley), but as the case unfolds it becomes clear that the taunts are more like case-notes and the killer is actually hunting other serial killers. Including perhaps the worst serial killer in history. 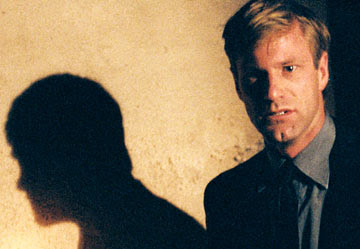 It's a little hard to tell what went wrong with "Suspect Zero". Given top-drawer cast and the creepy idea of a serial killer-killing serial killer profiler who uses psychic remote viewing to identify and track his targets this should have been quite the thriller.

But I found myself so bored with the first half hour that I almost gave up on the film, and when it finally became entertaining, it held my attention only very loosely.

Part of what makes the movie dull is that the characters feel lifeless, partly because the central characters never rise above the level of chiches (the tortured zealot agent, the inscrutable murderer, the loyal and supportive female agent), but also because the performers seem like they're giving their bare minimum. I expect Carrie-Anne Moss's performance to be perfunctory, but Aaron Eckhart and Ben Kingsley have both been far better with far less to work with than what I can envision that this film COULD have been.

Also, the film's is a little too predictable. When the pieces fall into place and the biggest mysteries are solved at roughly the one-hour mark, the rest of the picture unfolds on a straight line with no further twists. The ending, while stylish and thoroughly set up by everything that preceded it, feels abrupt and unsatisfying. It's clear that the movie ends when it's over--and I appreciate the fact that the filmmakers didn't feel obligated to tack on one of those obnoxious "shock endings" or "final twists" that ruin so many horror flicks and thrillers these days--but I was still left wanting something more. Perhaps more of a point, beyond "when you stare into the abyss, it stares back at you", "sometimes sacrifices have to be made to defeat great evil" or "free will isn't free" (or whatever point the ending was supposed to convey).

Overall, this film left me a sentiment that I more frequently reserve for low-budget pictures by inexperienced filmmakers with green casts: There was lots of potential here, and it would have been fantastic if it had been spent on a better movie.