The Bonus Scream Queen... not just for Independence Day anymore! 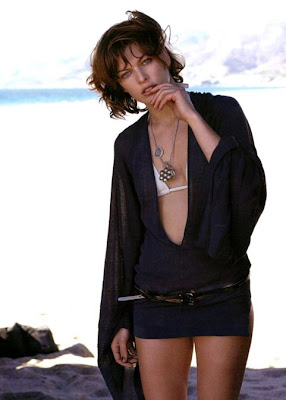 Milla Jovovich makes a special Friday appearance as she returns for a third time to the Saturday Scream Queen series in celebration of today's release of "Resident Evil: Retribution".

Born in the Ukraine, Jovovich moved with her parents to the United States at a young age and she was an internationally renowned model by the time she was 13. She soon found even greater success as an actress, emerging as an equally familiar face to fans of action films, horror films, and quirky indie pictures alike.

While almost every film fan knows her as Leelu from "The Fifth Element" (1997), she is most famous for starring as the supercharged zombie killer Alice in the "Resident Evil" series. Click here to see reviews of the entire series, as well as all of Jovovich's past Saturday Scream Queen appearances.

You can see more of Jovovich in Shades of Gray's "The Milla Jovovich Quarterly" series, and in posts at Cinema Steve. (In case you can't tell, I'm quite a fan.)