'Bloodlock' should have stayed locked up 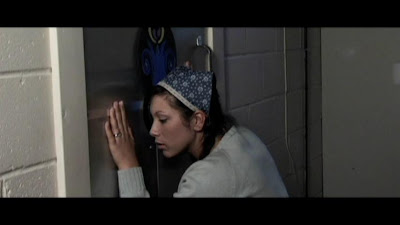 William Victor Schotten is a filmmaker who is learning is craft as he goes. This is evident from the two films from him I've watched so far... this one, the oldest, and the Rapture/Zombie tale "Sabbath". Both date from 2008, but while "Sabbath" is far from perfect, it's a much, MUCH better film than "Bloodlock."

Heck, based on the difference in quality between "Bloodlock" and "Sabbath", I may have to get my hands on Schotten's most recent film--"Silver Cell" from 2011, because if he's continued at that rate of improvement, he may just have created one of the Greatest Movies Ever Made.

There's no word to describe "Bloodlock" better than "inept." The pacing is wrong from the get-go and it only gets worse as the film unfolds... with sequences that could have benefited from a little a pause being raced through like they were running out of film, and sequences that should have been quick being dragged out. The script is disjointed and chaotic, with a number of tones drifting through the disorganized story like so much flotsam as the film moves from being a erotic thriller, to a gory monster flick, to a half-assed comedy. There was also clearly a lack of funding when it came to special effects and a lack of rehearsal time when it came to the fight scenes... and the inexperience of Schotten and his technical crew only makes these shortcomings more obvious because they were either unable to use cinematic trickery to cover for them, or unaware of the fact they were looking at inadequacies until it was too late to do anything about it. And, finally, the ultimate doom for the movie are the mostly amateurish actors struggling with flat, poorly written lines. (Dominic Koulianos and Karen Fox are not only called upon to deliver awful lines, but they don't seem to be all that talented to begin with. That's a mix that destroys almost every scene they're in.)

This is, however, also one of those films I wish I could say nicer things about, because hidden inside this mess are some gems. I like the pirahna-style design used for the vampires in the film, and I think something cool could be done with the psychic housewife-turning-monster-hunter. But in this film, both of these cool aspects are all but wasted.

The one thing I have to give Schotten (or maybe screenwriter Tom McLaughlin) is that he realized this movie was disjointed and messy. So clear was that realization was that the film ends with the old "it was all a dream" and then loops back on itself by repeating an early scene. If you have a movie that doesn't make any sense, I suppose that's not a bad way to try to say "We meant to do that!". My reaction to such endings are typically either an irritated growl at the lazy cop-out or a grin at the well-executed creepy moebius loop, but seeing it here at the end of "Bloodlock" just made me a little sad. It seemed to say that the filmmakers knew what they had here didn't amount to much of anything.