"Twice-Told Tales" is a collection of three short films loosely based on stories by Nathaniel Hawthorne. They are a nice mix of melodrama and horror, and, although they unfold somewhat slowly (and those who think a horror movie has to have gore and violence or it not worth seeing will be bored), each tale features some great classical style acting and chilling twist endings that will keep lovers of well-done dramas entertained.

Vincent Price plays the lead in two of the three segments, and he displays clearly why he was a rising leading man in Hollywood until he shifted gears career-wise and became a star of horror films. Although he is the villain in each piece, he carries himself with such an air of melancholy-tinged elegance that one can't but feel a little sympathy for the evil men he portrays.

In film opens with "Dr. Heidegger's Experiment." Here, Price plays the best friend of the title character (played by Sebastian Cabot), a scientist who discovers a literal fountain of youth in the crypt of long-dead woman they both loved. The two friends regain their their youth, and even manage to resurrect their beloved Sylvia (Blanchard). Unfortunately, turning back the hands of time also resurrects dark secrets long buried. 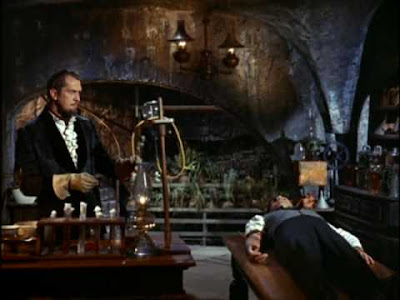 The second story is "Rappaccini's Daughter". In it, Gionvanni (Halsey) falls in love with a mysterious beauty (Taylor) who never leaves the mansion and walled garden she shares with her father, Rappaccini (Price). It soon comes to light that Rappaccini used chemistry to turn his daughter's very touch poisonous to protect her from sin... and when it becomes clear to him that Giovanni and his daughter love each other, he takes steps to ensure they'll be together and faithful to each other forever. This is perhaps the oddest and saddest of the three tales, and while Price's character is definitely a total madman in this story, he still manages to bring a sympathetic quality to Rappaccini in his performance.

Finally, we have a very loose adaptation of Hawthorne's novel "House of Seven Gables" where Gerald Pyncheon (Price) returns to his his ancestral home with his wife Alice (Garland) and awakens a restless spirit and a deadly curse. While the first two stories were tragedies with "mad science" overtones and nifty twist endings , this one is pretty much a standard haunted house story with all the various expected elements used exactly as anticipated. It's not only a fairly bad take on Hawthorne's novel, but it's also the weakest short film here, and it was one that saw me wishing for the credits to start rolling. Still, Price gives a good performance, and there's never anything wrong with watching someone as lovely as Beverly Garland, even if she is in some nicely put-together dreck. (Oh... and the model shot of the house of the title is probably one of the worst bit of special effects since the Alpine village in Hitchcock's "The Lady Vanishes.")

Although it ends on a down-note, "Twice-Told Tales" is an interesting anthology film. It's a film I recommend highly to fans of Vincent Price, particularly if they've not been exposed to his pre-Corman and pre-Castle days. He is in great form in this film.