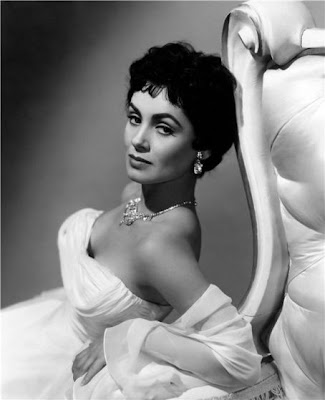 Susan Cabot's rough childhood, which saw her grow up in a string of eight foster homes, led, by some accounts, to her being cold, distant, and downright abusive to those around her in her personal life. Something which ultimately led to her demise.

Cabot's film career was an on-again, off-again affair. She was a contract player with Universal Picture in the early 1950s, but asked to be released form that contract in 1954 so she could do theater work in New York City. During this time, she appeared mostly in westerns.

In 1957, Roger Corman convinced her to return to the film business and she spent the next two years primarily appearing in films produced or directed by Corman. Among these is her very best performance in the chilling "Sorority Girl"--perhaps one of Corman's best and most heart-felt pictures. It's dressed up like an exploitation horror thriller, but it's really a far deeper picture about a sociopath's doomed struggle to find friends and fit into society.

Cabot ended her film career in 1959 with another starring turn as a sociopath in "The Wasp Woman", this time a decidedly villainous rather than piteous character. This mad scientist film set in a cosmetic company is slow-moving and mostly dull, but Cabot is, once again, quite good. Perhaps a reason she excelled at playing sociopaths is because she was putting a big part of herself up there on the screen?

As I mentioned at the beginning of this piece, Cabot was cold and abusive to those close to her. In fact, she was so abusive to her son that he was convicted of involuntary manslaughter and given a suspended sentence after he bludgeoned her to death while she slept in 1986.