'Bite Me!' is done in by a bad script

A failing strip club is invaded by monstrous spiders whose venom either bring out repressed sides of a victim's personality or turns them into hideous mutants.

The problem is not with the actors. They're all pretty good, with Caitlin Ross (playing a doped-up stripper who manages to save the day while basically sleepwalking through the mayhem of monster spiders and crazy gunmen), Michael R. Thomas (as the brash club owner), and Misty Mundae (as a mild-mannered stripper who becomes Rambette after being bit by one of the spiders) being especially funny in their parts. 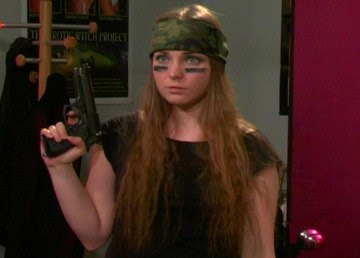 The technical aspect of this low-budget production is also very good, with decent camera work and lighting, nifty stop-motion animated monsters, and well-executed green-screen and CGI elements. The film actually looks better in many respects than movies with budgets that were probably ten times what it cost to make "Bite Me!"

What drags this movie down from, based on the concepts, the acting, and the technical execution, could have been at least a 7 rating to a very low 5 is the script.

The script is unfocused, flabby, and at times redundant. While there are some very funny bits in the beginning of the film but they are surrounded by material that sets up a subplot that never really pays off. The same is true with subplot about organized crime elements who are trying to take over the stripclub. An interesting character in the club's bartender is not given the development she should get, and the same is true to the club's owner. If the script had been taken through another couple of drafts, I'm certain writer/director Brett Piper would have noticed these flaws, saved the government conspiracy stuff for another movie and focused more on the stripclub and its denizens. That's where the heart of the movie is, and it's a shame that the time isn't there to develop it properly.

Still, "Bite Me!" is a fun little movie. It's worth seeing it you like cheesy monster films or if you're a fan of Misty Mundae or any of the other actresses appearing in it; they actually get to act in it, and they're good! (They mostly keep their clothes on, though, so if you're looking for the usual lesbian nookie, this is not the film for you.)