'Point of Terror' is nearly pointless

Lounge singer Tony Trelos (Carpenter) thinks his dreams of stardom are at hand when he becomes the latest boy-toy for the oversexed wife of a record executive (Thorne) and she promises him a record contract. But things get dangerously complicated when her husband (Marsten) turns up dead and Tony falls in love/lust with her stepdaughter (Hansen). 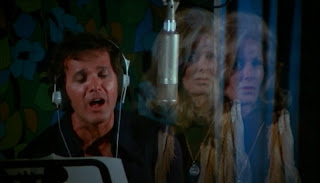 The film isn't helped by the fact that the only performer with any screen presence in the whole thing is Dyanne Thorne. As prone as I am to make jokes about her two humongous talents, she actually does have quite a bit of charisma... and it really shows when she's surrounded by the caliber of actors in this film. She pretty much steals the movie from poor Peter Carpenter, although he obviously intended this to be his vehicle of stardom.

Speaking of Carpenter, this is the second of his films that I've watched--the other being "Blood Mania", which he also wrote, produced, and starred in, and which I will be reviewing one of these days. In both cases, I felt that he was an okay actor but simply didn't have much in the way of screen presence... or maybe he simply had the misfortune of always playing against actresses who outshone him. This was the last of Carpenter's films, and I feel like he was to the 1970s as John King was to the 1940s.