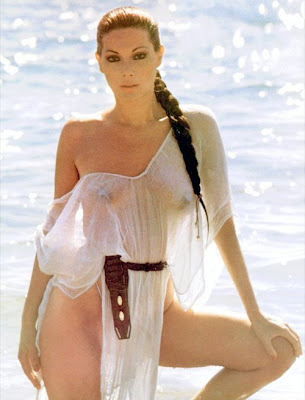 Born on Christmas Eve in 1948, European actress Edwige Fenech started her career on a beauty contest circuit but soon found employment as a model. In 1967, she made her film debut, and she cut a striking (and often naked) figure in dozens of horror films and sex comedies through the 1970s and early 1980s.

As the 1980s wore on, Fenech transitioned to parts that called more upon her talent for acting rather than disrobing, but by the mid-1990s, her career had evolved to the point where she was famous for mostly being famous and she was a regular on Italian talk shows.

Fenech retired from acting and moved behind the camera at the head of her her own production company. She has produced numerous films and mini-series for Italian television, including a very well-received adaptation of Shakespeare's "The Merchant of Venice."

Fenech made a brief return to acting in 2007 with a bit-part in the torture-porn cannibal extravaganza "Hostel II," mostly just showing up to show up as an inside joke for fans of 1970s European horror films.