Famed horror actor Paul Toombes (Price) suffers a total breakdown after his fiance is brutally murdered. After more than a decade in an insane asylum, he is released, and his long-time friend, collaborator, and co-creator of Dr. Death, the character that made Toombes a star, Herbert Flay (Cushing) presents him with the comeback opportunity of a lifetime: The starring role in a television series based on their signature character. Toombes reluctantly agrees, but his reluctance soon turns to horror as someone starts murdering young women and cast members in ways that reflect the methods of Dr. Death. Is Toombes a homicidal maniac, or is someone else committing the murders and trying to frame Toombes? 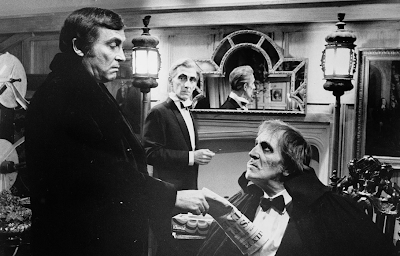 "Madhouse" is part murder-mystery, part mad-stalker flick. The script reminds one of the horror-mysteries of the 1930s where cloaked villains crept around in dark houses while gas-lighting and/or murdering victims... and this is really the only thing that it succeeds at. The truth behind the Dr. Death killings is one that an attentive viewer could have figured out (and it speaks rather poorly of Scotland Yard's finest that they didn't follow that avenue... but if they had, there wouldn't have been a movie). The film sees Price do what he's done in several movies before--he teeters on the edge of madness and he runs around terror-struck, with interludes of expressions of regret and self-doubt. But, it's what Vincent Price was most famous for, and he does it very well in this film.

Price is supported by a decent cast, with Cushing brightening every scene he's in as always (even if he doesn't have much to do until the very end). Quarry, as the obnoxious porn-film director turned TV producer, and Pyne as the perky, ever-helpful publicist, being particularly good in their parts. The one flub acting-wise are a pair of blackmailers who show up about 2/3rds of the way through the film--the actors are as lame as the plot thread they're part of.

What Price and none of the actors are supported by is the script. It only works if the viewer doesn't think about what he's just seen once the movie's over. The ending simply makes no sense whatsoever, not on any level. It's not a failed twist-ending... it's just a nonsensical one. (And this is a shame, because the climactic scene is actually pretty cool.)

Something that makes this movie great fun for fans of classic horror and sci-fi movies, is the opportunity to see icons like Price and Cushing together in the same scenes... but there is one scene where Price suffers by sharing the stage with Cushing. It's very clear in that scene (which it toward the end of the film) that Price's success was built on his amazing voice, and his ability to ham it up and still be lots of fun to watch, while Cushing was a truly Great Actor. I greatly enjoy Price when he cuts loose, but the differences in styles and levels of acting talent between the two men was clearly on display in that scene. (The speech about the Dr. Death character and superior acting talent was something I found mildly amusing, given my opinion above.)

"Madhouse" suffers from a weak script, but I still think it would be fun to watch for fans of Price and Cushing.