A movie for those who love classic horror films!

A group of college students (Ashbrook, Carey, Foreman, Galligan and Johnson) attend a midnight preview of a new waxwork exhibit in their neighborhood. But this is no ordinary wax museum--it's a place where a minion of Satan (Warner) is trapping victims in the displays as part of a large ritual to unleash Hell on Earth! 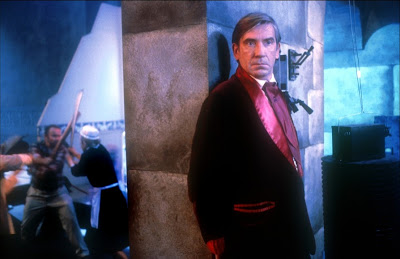 Anyone who's thinking about making a hipper-than-hip, self-referential horror film needs to see "Waxwork". Anyone who is thinking about making a self-referential horror film who doesn't have respect for the genre needs to be strapped down ala Malcolm McDowell in "A Clockwork Orange". Because no one who has made movies like that in the past several years--including Wes Craven--have done it as perfectly as Anthony Hickox did it in 1988's "Waxwork".

Watching "Waxwork" will give lovers of cheesy horror movies the enjoyment of the climactic scenes of the films we love without having to sit through clumsy and padded drek to reach them. As the characters are thrown into the museum displays, we get a great ending to a werewolf movie and great endings or set-ups to vampire mummy movies in the classic Hammer horror and Universal Pictures veins. (Actually, the mummy segment is an especially clever treat for lovers of classic horror movies because it's it's scored with music from "Swan Lake".)

While the acting and assortment of main characters is of the style that was typical for teen comedies and television shows (and therefore maybe not to the liking of some viewers), Hickox delivers a movie that is far more satisfying than any so-called horror comedies being made to day, far more respectful of the films it pokes a little fun at while paying tribute to them, and even far more sensual in places than some horror movies that use that as their main selling point. Hickox and his cast can do erotic and sexy without needing to rely on nudity.

If you love the old Universal and Hammer pictures, you need to check out this movie. The same is true if you get a kick out of watching old school British actors like Patrick Macnee and David Warner doing their thing. And if you're one of those people who save these sorts of films for Halloween, you need to make a note so you can remember to get this one.