After a clan of mutant cannibals dwelling in the woods of West Virginia cause a prison transport bus to crash, a prison guard (Frederic) must scheme to save himself and a survivor from a previous attack by the cannibals (Montgomery) not only from the mutants but from the vicious criminals to have taken them captive. 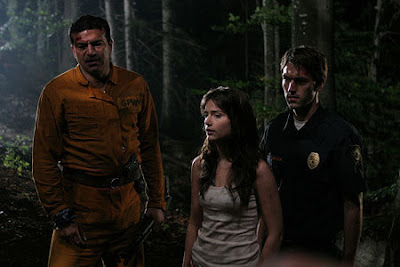 In some ways, this is the best entry in this series so far. In others, it's the worst.

In the "plus column" there's the fact that the filmmakers tried to come with something a little different. They mostly dispensed with the usual bunch of Attractive Young People and replaced it with a bunch of escaped convicts and their hostages. The mutant cannibals remain the same--exactly the same as in the previous two films in fact--but the fact that they are preying on predators this time makes for an interesting change. The various plot complications that arise are also different than the usual fare in films of this kind.

In the "minus column" there's the problem that some of the different ideas haven't been implemented all that effectively. The promise of the "cannibals vs. criminals" is never exploited as effectively as it could be, beyond a couple of interesting death scenes. The two lead criminals are established as cunning and skilled killers, and another prisoner is billed as a former soldier, but they don't really do much except to behave like bullies and just talk about taking the fight to the cannibals. While I've no doubt that this is how real criminals behave, it doesn't make for interesting movie characters. There's also the issue that the murder scenes, while gorier, are generally so outlandish or cartoonish that they are more laugh-worthy than horror inspiring--and it doesn't help that many of the gore effects are fake-looking. Finally, the acting ranges from indifferent to bad, with Tamer Hassan and Gil Kolirin (as the lead escaped convicts) being the only really interesting cast members because they are so over the top at all times.

There's also a nitpicky flaw... that being the near-total absence of a "Wrong Turn" anywhere in the story. I suppose if you engage in a logical stretch, the "wrong turn" could be the choice of camp site by the river rafters who become the cannibals first victims this time out. Or maybe the "wrong turn" could be the choice made by our hero when he leads the convicts to the watch-tower and hoped-for safety--this being the watchtower that burned down in the first "Wrong Turn" movie. But both those are quite the stretches to get the event of the title into the film. This then becomes a "Wrong Turn" film without a wrong turn, which is something a poster on my Facebook feed joked about following my review of "Wrong Turn 2". (And while I'm on the subject of the title, who exactly was "left for dead"? Did I miss something?)

Although better in some aspects than the original "Wrong Turn" film, and it gets some consideration for playing with the formula in an even more extreme way than "Wrong Turn 2" did, this sequel is still flawed enough that you can leave it until you've seen all the other mutant cannibal films you can think of. Including "Wrong Turn 2: Dead End"... and for that matter even "Wrong Turn" as it had better acting and the nifty scene in and around the watch-tower.