Trapped by a cave-in in a remote, abandoned mine, five men cut the arm off of another companion in order to ward off starvation. Five years later, the man they mutilated seemingly returns to seek bloody revenge on them. Viewer boredom and an utterly predictable "twist" follow. 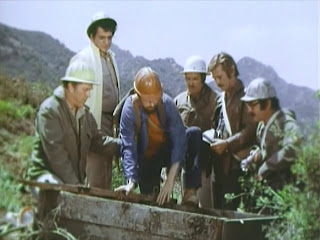 "The Severed Arm" is a low-budget film that's too slow-moving to be a real thriller and nowhere near intense or violent enough to even approach the status of slasher-flick. With its bland, badly acted characters, dippy electronic score (that sounds at times like someone is just pushing random keys on a Moog synthesizer), and its multitude of plot holes and characters behaving stupidly for no reason other than to advance the plot, there really isn't much to recommend this film aside from the occassional glimmer of creative camera work and some nice lighting of night scenes and dark rooms. The final few minutes do finally manage to bring a little bit of horror sensibility to the film, but it's really too little, too late. (In addition to being pretty much be exactly where I was expecting the movie to head all along.)

In fact, I think the only reason to see this film is to look at those nicely done lighting set-ups. On a couple of occassions, they manage to evoke some drama in this otherwise dull movie. (On the flipside of that, there's also an extended night sequence that's so badly lit it's hard to figure out what the heck is happening.)