It's a predictable view from 'Secret Window'

This review is being posted as part of Blog Cabins' 30 dAyS oF cRaZy blog-a-thon! The blogosphere is a tad more insane this month than usual!

Mort Rainey (Depp) is a novelist on the verge of a burn-out when his life gets even worse: A maniac (Turturro) accuses him of plagiarising a story he wrote, and begins an ever-increasing campaign of violence and terror against Mort and those closest to him. 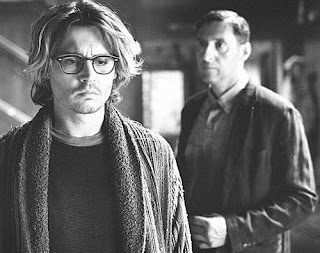 Based on a short story by Stephen King, "Secret Window" features a number of themes related to the darker side of the basically lonely professional life that every writer leads... and if one is familiar with those themes and how they've played out in King's works, where this movie ultimately goes is very predictable.

However, the cast is made up of competent actors--Depp once again shows what an excellent actor he is, and Turturro was downright frightening in most of his scenes--the script is well done, and the director clearly knows how to use all the tools in his bag of tricks to keep the suspense up.

Even if I realized early on that I was watching yet another movie about a crazy writer being stalked by himself, through a twisted part of his broken mind that has taken over, Koepp delivered a film that kept me watching due to nicely staged scenes and by managing to provide enough twists to keep me wondering if I was wrong about my assumptions. The script was also well enough written that I cared about the characters. I didn't want Johnny Depp's beleaguered writer to be a maniac, because
I liked him, and I certainly didn't want Maria Bello to end up in a shallow grave. It's one of those rare mystery movies where there really is no mystery if you've seen enough of them, but it is still well-crafted enough to make it worthwhile.

And it could be that this film was predictable to me because I've seen so many horror, mystery, and suspense films. Maybe viewers who haven't watched quite as many movies, or are as familiar with Stephen King's Package of Repeated Themes and Stereotypes would be taken aback by the "shocking twist ending."