Five years after an accident in a top secret lab unleashed a virus that turns dead bodies into flesh-hungry, violent zombies, the world is overrun with undead. Pockets of survivors still exist, and Claire Redfern (Larder) leads a convey from place to plance, attempting to gather them and form strength in numbers. She eventually crosses paths with Alice (Jovovich), who is on the run from the creators of the virus. They consider her their property, and they want to back. Will Alice be the salvation of Claire and her mobile community, or will she bring doom to them all? 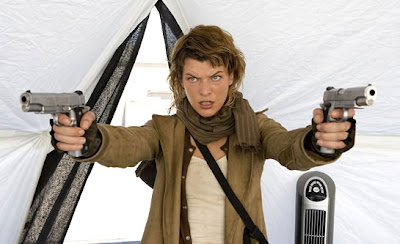 After getting over the dissapointment of the fact that "Resident Evil: Extinction" does NOT follow up on what seemed to be an obvious and very cool sequel set-up at the end of "Resident Evil: Apocalypse"--except with an brief exchange between Carlos (Fehr, the only returning castmember from the other film aside from Jovovich) and Alice--I came to appreciate this supposedly final film in the series for its "The Road Warrior Meets George Romero's Day of the Dead" vibe.

I can't praise the film for its script... it unfolds as though it was based on someone's "All Flesh Must Be Eaten" or "Dark Conspiracy" roleplaying campaign, as the fillm moves from horror-flavored, action-oriented horror encounter area to horror-flavored action-oriented encounter area. While the main story-thrust of the film is resolved and the main villain within reach gets his by the end of the film--and please say that's a spoiler... you KNOW that even before he shows up in the movie that the mad scientist is going to bite the dust during the final reel!--the film leaves so many dangling plot-threads that it feels more like the middle of a film series instead of the end. Just like a supposedly "climactic" session of a well-run (and continuing) roleplaying game session.

I also can't really praise the acting in this film, because I don't think there was any. (I know that's not true... the apparently lack of acting is acting in and of itself, as anyone who's seen more than two or three low-budget indie horror movies will confirm). But, the film is so devoid of anything but action that there's no need for the actors to do anything but run around and shoot off blanks and beat on extras in zombie make-up. Jovovich does a little acting when she first wakes up at what seems to be the beginning of first "Resident Evil" movie, and then later when she comes upon the cornerstone of Umbrella Corporation's latest project, but she isn't exactly required to stretch herself.

I am, however, impressed with movie's breakneck pace and how it kept me entertained... and even how it shocked and startled me with violent zombie attacks. The zombie crow sequence was also expertly staged and executed, and it was one of the scariest sequences I've seen in recent cinema. Yes, it was remincent of both "The Birds" and "Night of the Living Dead"... but I wouldn't have thought that borrowing from two such different classics could result in something so nifty.

There isn't a scrap of padding in the film. It promises to deliver zombies and lots of gory violence, and it delivers on that in spades. While part of me would have liked a slightly more structured plot, the overall film still worked for me. I also didn't mind the fact that the end of the film really isn't all that much of an ending--instead, it opens up branches to two possible sequels. Maybe that's because I've been running running roleplaying game campaigns for some 30 years now, and that's exactly how I like to "end" my campaigns. I want to always keep openings so the fun can continue, if the players are willing.

"Resident Evil: Extinction" is not a masterpiece. In fact, it's probably downright forgettable, and I am certain that in a week, my memories of it will be as vague as those I have of the first two, but while in the theater, I enjoyed myself immensely.