A British explorer (Lee) finds what he believes to be proof of Darwin's theory of evolution high in a frozen mountain glacier on a mountain in northern China. As he is transporting the frozen carcas back to the West on the Trans-Siberian express, a weasely collegue/competitor (Cushing) decides to get a look at the find, and inadvertently unleashes a horror that has lain dormant for tens of thousands of years. It quickly becomes apparent that no-one onboard the train is safe as it makes its way across the frozen wilderness.... 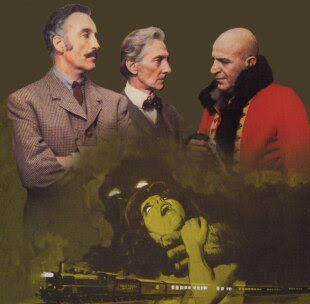 "Horror Express" is another one of those movies I remember being scared by as a kid. Specifically, the scene where the Kozak leader (played by Telly Savalas(!)) and his men are battling the monster in a darkened traincar. This is one of those films that is exactly as scary as I remember it!

A bit slow-moving at times, "Horror Express" still provides plenty of chills and shocks... and even a couple of unexpected plot-twists. The lighting, camera-work, and special effects all help underscore the growing tension in the film--even if some of the FXs are a bit cheesy--and the actors are all very good, despite the fact that this is one of those international European production where a dozen different languages were being spoken on the set. Lee and Cushing in particular shine; I think this movie features some of the better performances given by either one of them.

I think this is a must-see if you're a fan of Cushing, Lee, or the Hammer Films-style of movies.